New Jersey is the third state to ratify the US Constitution

On this day in history, December 18, 1787, New Jersey is the third state to ratify the US Constitution. The area was first settled by European settlers from the Netherlands and Sweden, but was transferred to England when Fort Amsterdam, which would become New York City, was captured by an English fleet in 1664.

The area between the Hudson River and the Delaware River was given by King James II as a land grant to two of his supporters, Sir George Carteret and John, Lord Berkeley of Stratton. Carteret and Berkeley named New Jersey after the largest of Britain's Channel Islands, Jersey, which was Carteret's birthplace. 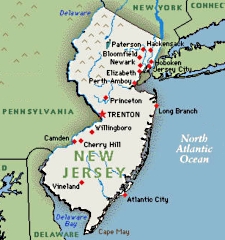 New Jersey was always a leader in the fight for freedom during the founding period of the United States, being largely populated, not by direct European immigration, but by migrants from other American colonies who fled to the colony seeking even more freedoms than in their previous locations. New Jersey not only became the third state to accept the US Constitution, with a unanimous vote, but New Jerseyans ratified their own state constitution on July 2, 1776, two days before the Declaration of Independence was even adopted. On November 20, 1787, New Jersey also became the first state to adopt the Bill of Rights.

The state has always played an important role in American history due to its location, situated between New York City on the northeast and Philadelphia on the southwest. This pivotal location earned it the name "Crossroads of the Revolution," during the American Revolution as both British and American armies crisscrossed the state numerous times. 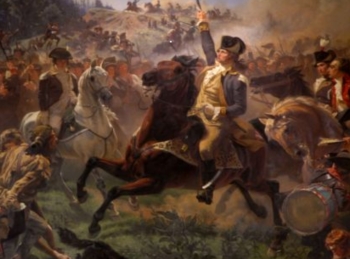 Washington rallying the troops at Monmouth by Emanuel Leutze

Several important battles of the Revolution were fought in the state, including the Battle of Trenton, in which George Washington crossed the Delaware and surprised the Hessian Troops at Trenton on Christmas Eve, 1776, and the Second Battle of Trenton, in which Lieutenant General Cornwallis' troops were stopped by Washington at Trenton late at night on January 2, 1777. Cornwallis stopped the assault, intending to resume the next morning, but instead, Washington's army slipped away to Princeton and defeated British forces there. The victories at Trenton and Princeton were a huge rallying point for the Americans who had suffered a devastating string of losses earlier in 1776.

Morristown served as the Continental Army's winter quarters twice and the massive Battle of Monmouth proved that the Continental Army could contend with the British army, drawing them to a standstill after a winter of training and military exercises at Valley Forge increased their skills in battle.

During the Constitutional Convention, New Jersey played an important role in the development of the bicameral congress. Small states rejected Virginia's plan to have congressional representatives apportioned by state population. This would mean the smaller states would constantly be overrun by the larger states. Instead, New Jersey's delegate William Paterson proposed a unicameral legislature with each state receiving equal apportionment. The two ideas were eventually put together, with the House being apportioned by population and the Senate containing equal apportionment, balancing the interests of the small states vs. the larger states.