The Skirmish at Petticoat Bridge draws away support from Trenton 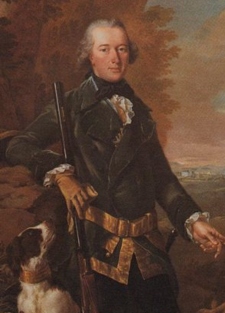 On this day in history, December 21, 1776, the Skirmish at Petticoat Bridge draws away support from Trenton, opening the way for George Washington to capture the Hessian brigade there on the 26th. Sir William Howe's army had been brought to a standstill after driving the Continental Army across New Jersey because Washington had commandeered every single boat along the Delaware River, preventing him from crossing and following them into Pennsylvania.

Howe's response was to establish outposts across New Jersey and order the British army to settle in for the winter. The southernmost posts were located in the towns of Trenton, Bordentown and Black Horse (now Columbus), with approximately 3000 soldiers stationed at Bordentown under the direction of Hessian Colonel Carl von Donop.

Virginia Colonel Samuel Griffin was in Philadelphia recovering from wounds he received at the Battle of Harlem Heights. Griffin was given instructions to take a contingent of men into New Jersey to harass the enemy's southern posts. Griffin took a hodgepodge of militia from Virginia, Pennsylvania and New Jersey and they made their way to Mount Holly, 7 miles south of Black Horse and 14 miles from Bordentown, where they built a fortification on a hill near an iron works.

On the 21st, Griffin's men, numbering about 600, swarmed over a contingent of Hessian soldiers at Petticoat Bridge, just south of Black Horse, forcing the Hessians to withdraw. The following day, George Washington's assistant, Joseph Reed, met with Colonel Griffin and told him of the planned attack on Trenton, asking Griffin to help create a diversion to draw Von Donop's men away from aiding their comrades in Trenton, which was only six miles from Bordentown. 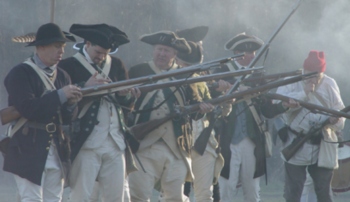 Well, the diversion had already been created, Von Donop sent out his entire force of 3,000 men from Bordentown in retaliation for the attack at Petticoat Bridge. On the 23rd, the two forces met, forcing Griffin's men to withdraw to Mount Holly where they gathered on the hill near the iron works. This location has earned this entire engagement the name the Battle of Iron Works Hill.

Von Donop's men stayed in Mount Holly that night where they engaged in general carousing. Most of the town's residents had fled, except for a certain "exceedingly beautiful widow of a doctor," whom Colonel Von Donop stayed with that night. Von Donop was said to have been smitten with this woman and instantly decided to move his headquarters to Mount Holly. She is undoubtedly the reason that Von Donop's troops stayed inexplicably in Mount Holly for the next two days, until, to Von Donop's horror, he learned that Washington had overrun Trenton and captured a thousand Hessian soldiers. If he had only returned to Bordentown, or never left in the first place, he could easily have come to their aid.

Historians have speculated about the identity of the woman in Mount Holly. Was she just a weekend paramour? Or was she a patriot who purposely deceived Von Donop in order to keep him from coming to the aid of the soldiers at Trenton? Historians have not been able to definitively identify the woman at Mount Holly, but there is one candidate who consistently comes up as a reasonable possibility and she is none other than... Betsy Ross!