The Battle of Cedar Bridge is fought

During the Revolution, Royal Governor William Franklin, son of Benjamin Franklin, authorized Loyalist supporters to form militia groups to fight against the "patriot" rebels. Numerous of these "Boards of Associated Loyalists" sprung up around New Jersey, including one in the New Jersey pinelands which had Captain John Bacon as one of its members.

Over the course of several years during the war, Bacon earned quite a notorious reputation for making raids on the homes and businesses of patriots throughout southern and eastern New Jersey. In one particularly gruesome act, Bacon and his followers, who were known as the "Pine Robbers" or the "Refugees," killed 30 crewmembers of the patriot privateer, Alligator, as they slept on Long Beach near their ship. The event caused an all-out manhunt as the militia tried to capture Bacon and bring him to justice. The massacre is called the "Barnegat Light Massacre" or the "Massacre of Long Beach."

As the end of the war approached, Loyalists began to dwindle in number as many fled to Nova Scotia or Canada. Pockets of Loyalist resistance began to shrink, especially in the cities and some of those that remained set up enclaves in the wilderness, hence the name, the "Refugees." They were truly like refugees in a foreign land. Bacon's group took on this nature of a wilderness resistance group. Homes were pillaged. Businesses were robbed. Travelers were accosted on the road. 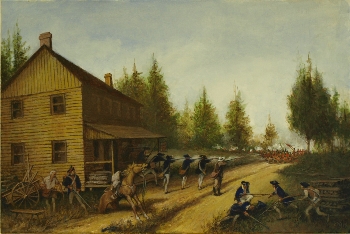 The Battle of Cedar Bridge by Louis Glanzman

In December, 1782, two militia groups were out en masse hunting for Bacon and his band. Captain Edward Thomas of Mansfield and Captain Richard Shreve of Burlington County were heading the search mission when they heard that Bacon was near Cedar Creek, in present day Ocean County near the town of Barnegat.

Bacon's men had stopped at the Cedar Bridge Tavern for some food. When he heard the militia was near, he knew he didn't have time to escape, so he set up a barricade across the Cedar Bridge. As soon as the militia arrived, a firefight broke out. Bacon's men lasted for quite a while, but the militia soon began to get the upper hand. Just when it seemed the militia would overtake the "Refugees," shots rang out from another direction from a bunch of local Loyalists who arrived to help Bacon. In the confusion, Bacon escaped, although he was injured in the fight. Several of these locals were later hanged for helping Bacon.

Four months later, in April of 1783, Bacon was captured and killed at another tavern near Tuckerton, New Jersey by some of Captain Shreve's men. He was so hated that his body was paraded through town and across the countryside and finally buried in an unmarked grave in Arneytown.

The Battle of Cedar Bridge, or the Skirmish of Cedar Bridge, was one of the very last engagements of the Revolutionary War. Word of a signed preliminary peace treaty with Great Britain arrived in the United States shortly after the skirmish and a ceasefire was declared by Congress in the same month that John Bacon was killed.