Franklin's writing in the almanac came off appearing as if it was all his own homespun sayings and advice, but in reality, much of it was copied from other European almanacs and other books. Many of the sayings and puzzles were just borrowed verbatim from these sources. Even the name Richard Saunders, Franklin's persona in the series, was borrowed from a popular London almanac called the Apollo Anglicanus. Saunders eventually came to be known as "Poor Richard" and this was borrowed from another London almanac called "Poor Robin's Almanack."

Poor Richard's was published every year from 1732 to 1758, selling around 10,000 copies a year. It was Franklin's second most successful printing enterprise, after the Pennsylvania Gazette. The almanac was so popular that it was often the only other book in colonial homes beside the Bible. Between the Gazette and Poor Richard's, Franklin earned enough income to retire at the age of 42 in 1748. After retirement, Franklin's partner continued the printing business, while Franklin still provided the material for the almanac. 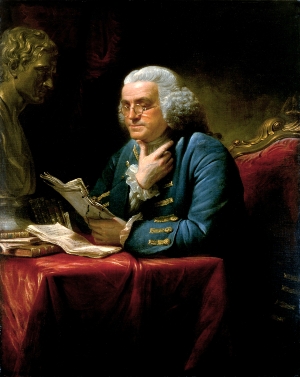 Franklin's almanac was purchased for a variety of reasons, including the calendar, astronomical observations and weather predictions, but it became known most of all for Franklin's proverbs, aphorisms and plays on words. Many of these sayings have come down to us today and are part of everyday life, including such sayings as, "Early to bed and early to rise, makes a man healthy, wealthy and wise;" "God helps them that help themselves;" "Well done is better than well said;" "Search others for their virtues, thy self for thy vices;" and "He that sows thorns, should not go barefoot."

A few other sayings from the almanac include, "To err is human, to repent divine, to persist devilish;" "Many have quarrel'd about Religion, that never practis'd it;" "No man e'er was glorious, who was not laborious;" "He that cannot obey, cannot command;" "By diligence and patience, the mouse bit in two the cable;" "Nothing but money, Is Sweeter than Honey;" and "It is better to take many Injuries than to give one."