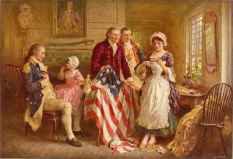 On this day in history, January 1, 1752, Betsy Ross is born in Philadelphia. Betsy Ross was born Betsy Griscom, the 8th of 17 children born to Samuel Griscom, a prominent Philadelphia carpenter. The Griscom family were Quakers and Betsy's great-grandfather was a personal friend of William Penn, the founder of Pennsylvania's "Holy Experiment."

As a teenager, Betsy's father had her apprenticed to an upholsterer and this is where she met her first husband, John Ross. John was the son of an assistant rector at the Episcopalian Christ Church. The two eloped and Betsy was ex-communicated from the Quaker church for marrying outside the faith. She and John then attended Christ Church and started their own business making such things as furniture coverings, clothing, curtains, bedspreads, etc.

Once the war started, John joined the Philadelphia militia and in mid-January 1776, he was severely injured in an accidental explosion while guarding ammunition. Betsy nursed John, but he died from his wounds. The following year, Betsy married again, this time to Captain Joseph Ashburn. Their home was occupied by British soldiers that winter during the British invasion of Philadelphia and Betsy was called the "Little Rebel" by the occupying soldiers for her patriotic views. Joseph was captured on a mission to the West Indies in 1780 and died in the Old Mill Prison at Plymouth, England in March, 1782, Betsy's second husband to be lost to the war. An old suitor of Betsy's named John Claypoole happened to be at the Old Mill when Joseph died. John brought back word to Betsy that her second husband had died and the two started up a new romance. They married in 1783 and were married for 34 years. 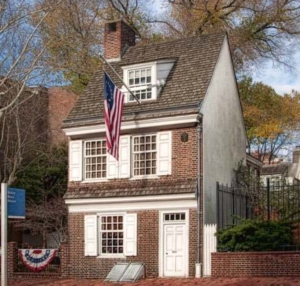 According to legend, George Washington came to Betsy's upholstery shop in May of 1776 with Robert Morris and George Ross, two other members of Congress. Ross was Betsy's first husband's uncle. It is believed General Washington and Betsy were personal friends since their pews were right next to one another at Christ Church. Betsy's first husband, who had just passed away, had two uncles that signed the Declaration of Independence, George Ross and George Read. These personal connections may have had something to do with her being asked to make the flag.

Washington allegedly pulled out a drawing with thirteen stars and stripes and 13 stars in a circle from his pocket and asked Betsy if she could make a flag using this design. Betsy said she believed she could, but suggested one alteration to the design. Washington had used six-pointed stars in his design. Betsy showed them how she could make a five-pointed star by folding a piece of cloth and by using only one snip of the scissors. Washington and the others were impressed and gave her the task.

Some historians have doubted the authenticity of the flag story since it was not told until the 1860s by Betsy's grandson, William Canby. There are other contenders for the prize of being the person who made the first American flag, such as Declaration of Independence signer Francis Hopkinson.

Betsy would make flags for the United States government for the next 50 years. Her sacrifice was great, having lost two husbands to the war. Her third husband was also injured at the Battle of Germantown and spent time in a British prison. You can visit the Betsy Ross house today in Philadelphia. This is the very house where Betsy had her shop when she was visited by Washington and asked to make the flag.