On this day in history, July 31, 1871, Rachel Fletcher confirms the Betsy Ross Flag story. Rachel was the third daughter of Betsy Ross. Her affidavit is important to the question of whether or not Betsy Ross actually created the first American flag, an idea that some historians doubt.

Today, most Americans are taught that Betsy Ross created the first American flag. This was not the case, however, until after the 1870s. The Betsy Ross flag story was first told publicly by her grandson, William Canby, in a speech to the Historical Society of Philadelphia. Canby, who was only 11 years old when his grandmother died, told that he heard his grandmother say from her own mouth that she had created the first flag, along with other details of the event.

Canby told that a secret committee, consisting of George Ross, Robert Morris and George Washington, approached Betsy shortly before the Declaration of Independence in 1776. The men showed Betsy, a seamstress, a flag design and asked her if she could make it. Betsy said she would try and offered several suggestions to change their design, including the use of 5-pointed stars, instead of 6-pointed stars. George Washington then redrew the design himself, incorporating Betsy's suggestions. 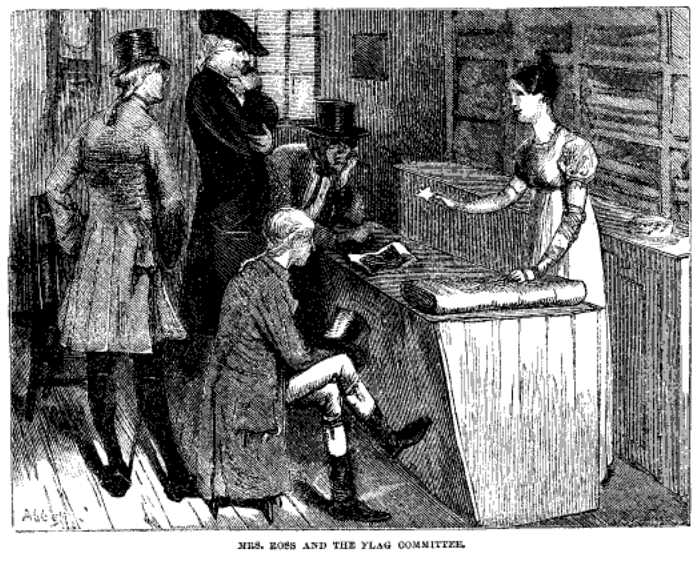 Betsy completed the flag and it was approved by Congress. Betsy then embarked on a lifelong career of flag making for the government. The Betsy Ross flag story was first told to a national audience in the July, 1873 issue of Harper's New Monthly magazine. From there, it entered into American folklore.

The problem with Canby's story is that there is absolutely no other evidence corroborating his story. Extensive searches have been made in the National Archives, the Pennsylvania Archives and Betsy's own papers and no such evidence has been found. This makes the affidavit of Rachel Fletcher, signed on July 31, 1871, all the more important.

Rachel stated that she heard her mother tell the story of George Washington asking her to make the flag on numerous occasions. In addition to Rachel's testimony, a niece and a granddaughter of Betsy's signed written affidavits affirming the same.

There is circumstantial evidence indicating Betsy's story may be true, such as the fact that she and George Washington sat next to one another at church, George Ross was her husband's uncle and some paintings place the 13 star flag in battles that would corroborate her story.

Some historians claim that since the story cannot be proven with outside evidence, the story must not be true. A more accurate assessment would be that since the story cannot be proved with outside evidence, that it may not be true. On the other hand, it may be true, just unverifiable. We will most likely never know for certain if Betsy Ross created the first American flag, but one thing is for sure, she will remain a part of American folklore for many years to come.