Thomas Sumter is routed at the Battle of Fishing Creek

On this day in history, August 18, 1780, Brigadier General Thomas Sumter is routed at the Battle of Fishing Creek. Sumter had been engaged in harassing British supply lines in early August while British Lieutenant General Charles Cornwallis and American Major General Horatio Gates maneuvered their armies toward Camden, South Carolina.

When Gates was completely routed at Camden, he sent messengers to Sumter who was approximately 40 miles east, to rendezvous in Charlotte, North Carolina. Sumter turned his army around and started heading north up the Wateree River, but the going was slow because he was transporting dozens of captured British supply wagons, hundreds of horses and over 100 prisoners.

When General Cornwallis learned of Sumter's movements, he immediately dispatched Lieutenant Colonel Banastre Tarleton with 350 soldiers to capture him. Sumter and Tarleton, who had burned Sumter's house to the ground earlier in the summer, were archrivals.

While pursuing Sumter, Tarleton characteristically drove his men to the point of exhaustion and had to leave more than half of them behind when he arrived at Sumter's still smoldering camp at Rocky Mount on the 17th. He took 160 of the most capable men, most on horseback, and continued the pursuit. 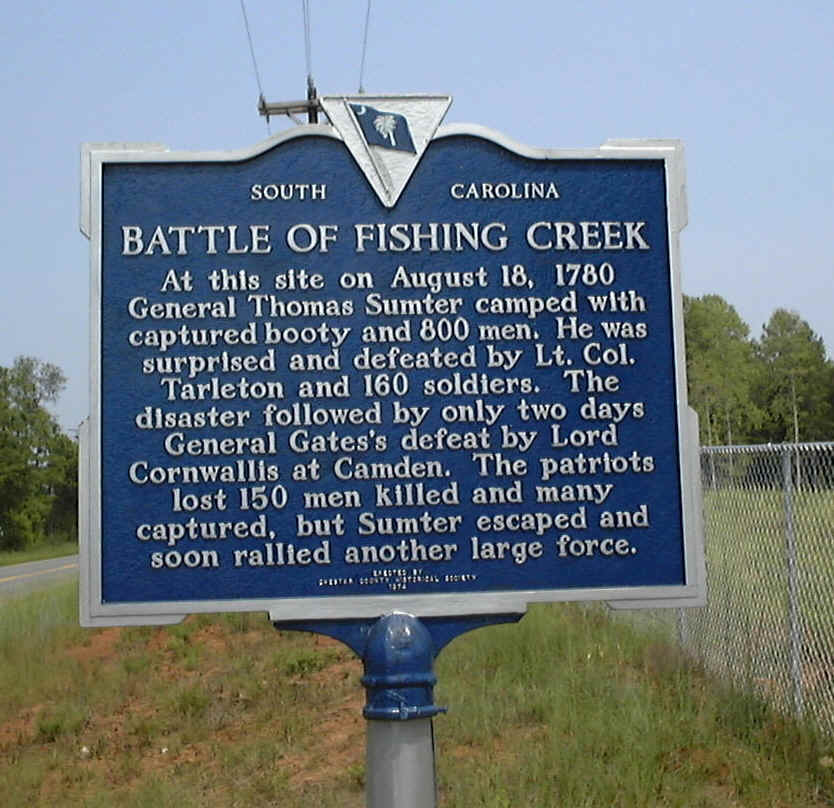 Sumter did not receive any intelligence regarding Tarleton's location on the morning of the 18th and inexplicably called a halt so his men could rest, placing only two sentries in the direction he last knew Tarleton to be. When Tarleton's band surprised the sentries they were both killed and unable to warn Sumter's camp.

Tarleton came upon Sumter's camp to the northwest of the confluence of Fishing Creek and the Catawba River, hence the name, the Battle of Fishing Creek, also sometimes called the Battle of Catawba River. It was around noon and most of Sumter's men were sleeping or cooking. Some had gone off to a nearby plantation. Their guns lay in a huge pile in the middle of the camp. Sumter was napping underneath a wagon.

Tarleton ordered an immediate charge. His cavalry was into the middle of the camp and in control of all the weapons before the Americans hardly knew what was happening. Many were cut down as they stood up to defend themselves. The rest scattered and a brawl began. Over 300 Americans were captured and 150 were killed. All the British prisoners were released and the captured supply wagons and horses secured. Sumter escaped on a horse with no saddle and rode all the way to Charlotte where he arrived alone.

The rout at the Battle of Fishing Creek was one of the worst of the war. Sumter was able to get a measure of revenge on Tarleton, however, the following November, when he inflicted Tarleton's first major defeat of the war at the Battle of Blackstock's Farm, even though Sumter was severely wounded in the battle. Sumter, though he had his faults, would be one of the primary people responsible for recapturing the south from the British and forcing Cornwallis to his retreat and surrender at Yorktown the following year.