Articles of Confederation are approved

Drafting the Articles of Confederation Stamp, 1977

On This Day in history, November 15, 1777, the Articles of Confederation are approved by the Continental Congress for distribution to the states. All 13 states would have to ratify the Articles in order for them to become the first governing document of the new United States of America.

A Confederation of states was first called for in Congress on June 7, 1776 by Richard Henry Lee of Virginia when he submitted what became known as the "Lee Resolution." The Resolution called for three things, 1) a declaration of independence from Great Britain, 2) that foreign alliances should be sought and 3) that a plan of confederation between the colonies should be prepared.

On June 12, 1776, one day after appointing a committee to prepare a declaration of independence from Great Britain, Congress also created a committee to prepare a plan of confederation between the states. The committee, chaired by John Dickinson of Pennsylvania, submitted its plan to Congress one month later. Congress then began a long and tedious process of debating the final form of the Confederation that lasted an entire year. The final form of the Articles was determined during the summer of 1777 and the final document was approved on November 15 for distribution to the states. Three and half years later, the final state approved the Articles and it became law on March 1, 1781. 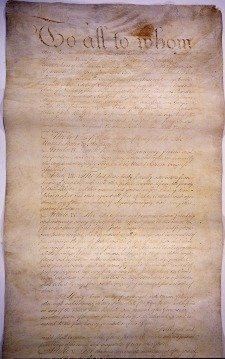 The Articles of Confederation created a weak central government due to fears of creating another too-powerful government like the one they had just overthrown. They are the source of the name "the United States of America." The Articles created a single body where each state had one vote. Changes to the Articles had to be agreed upon unanimously in order to become law. Congress had power to declare war, establish foreign treaties, settle disputes between the states and to settle maritime disputes.

The Articles did not, however, give Congress authority to tax, to control commerce between the states or even to compel its own members to attend sessions. These weaknesses made it virtually impossible for the new federal government to function and before long, calls were made for a new convention to create a new Constitution. The Articles lasted until March 4, 1789 when it was replaced with the United States Constitution.