On this day in history, October 26, 1776, Benjamin Franklin sets sail for France as ambassador from the Continental Congress. The new United States was formed on July 4th only a few months before. One of the nation's primary goals was to obtain foreign alliances. France was considered to be the best possibility for an alliance, due to France's continual feud with Great Britain dating back centuries.

When Ben Franklin arrived in France, he was already a well-known celebrity. In the 1750s, Franklin's discoveries with electricity had made him a household name in Europe after his letters about the subject were published. Upon his arrival in France, Franklin's fame was so great that he found his likeness on portraits, snuff boxes and busts. His celebrity status gave him exactly what he needed in Paris, status and open doors to the highest society and government officials. 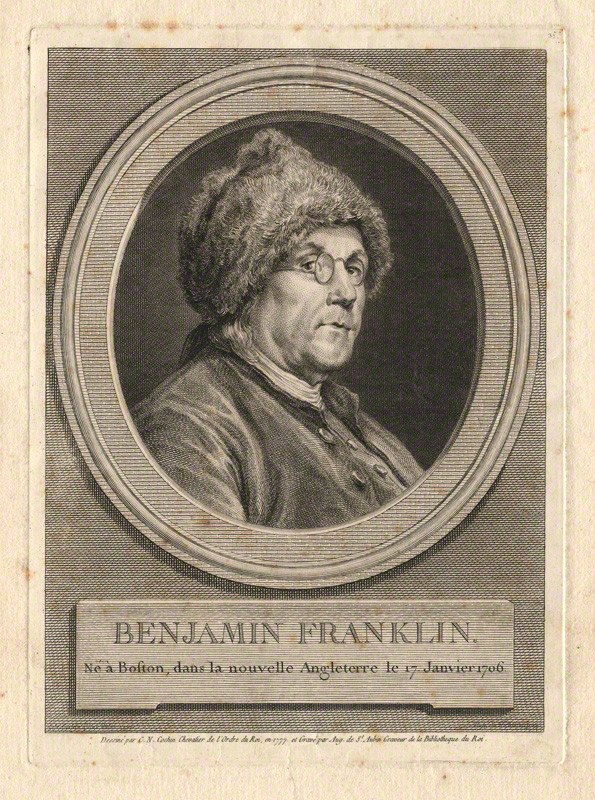 Franklin's chief mission in France was to secure a financial and military alliance. All of the high society citizens wanted to know the famous American and Franklin quickly became part of their inner circle. The only problem was that the French government was reluctant to publicly make an  alliance with the upstart Americans. Secretly, however, France was willing to send aid in the form of military supplies.

In the fall of 1777, the big break came when British general, John Burgoyne surrendered more than 6,000 men to the Americans at the Battle of Saratoga. This victory convinced France that the Americans could indeed handle a war against England. France decided to join the war and Franklin helped negotiate a treaty of alliance the next spring. Tons of military supplies, fleets of French ships and some of France's best soldiers went to America. Franklin encouraged such soldiers as the Marquis de Lafayette, Thaddeus Kosciuszko and Casimir Pulaski to go to America and join the fight.

France's involvement in the American Revolution turned out to be one of the keys to the eventual American victory. France's involvement, along with Spain, which joined the war as well, made the American Revolution a world war. Fighting erupted between France and England all over the globe, in such disparate places as the Mediterranean, Africa, India and the West Indies. England was forced to spread its resources to these far flung places and even remove troops from America to defend its interests elsewhere. England couldn't sustain such a vast war and was eventually forced to capitulate in the American colonies where the war began.

Return to top of Benjamin Franklin sets sail for France