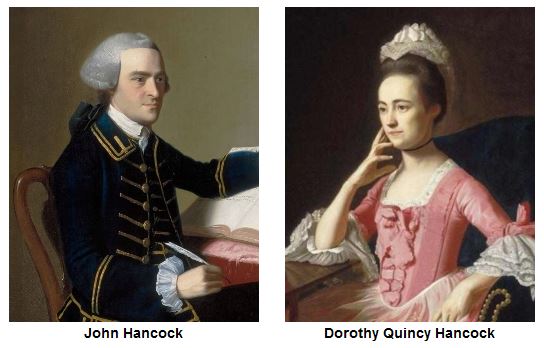 On This Day in History, October 28, 1775, John Hancock married Dorothy Quincy in Fairfield, Connecticut where they were staying while was Boston was blockaded by the British. He was presiding over the Continental Congress at the time and would soon sign the Declaration of Independence and be the first governor of Massachusetts.

Hancock and Quincy were engaged while they were in Boston and when the unrest started rising, Dorothy went to live with Hancock and his aunt Lydia at their Beacon Hill home. When colonists learned of British plans to capture patriot leaders, Hancock fled the city with his aunt and Dorothy in tow to Lexington where they stayed with the Reverend Jonas Clarke in Hancock's boyhood home.

John Hancock and Samuel Adams were warned by Paul Revere that the British were coming for them and they fled the city. Hancock and the two women eventually ended up staying at the home of Thaddeus Burr, uncle of Aaron Burr, the future Vice President and killer of Alexander Hamilton, in Fairfield. Lydia did all she could to keep Dorothy away from young Aaron because she suspected Dorothy had a crush on him, but John and Dorothy married anyway.

Lydia passed away in Fairfield in April, 1776 and the Burr home was destroyed by the British when they invaded Fairfield in 1779. John Hancock offered to pay for all the windows of a new home if Thaddeus would build an exact replica of Hancock's Beacon Hill home back in Boston, an offer which Mr. Burr took him up on.