The Declaration of Independence is adopted

On this day in history, July 4, 1776, the Declaration of Independence is adopted. Congress had voted unanimously 2 days before to sever all ties with Great Britain. The discrepancy in dates causes some confusion. The actual date of the decision to break from Great Britain was July 2nd, but the language of Congress' public announcement was adopted on July 4th.

Tensions with Great Britain had been increasing for years and many colonists were hoping to reconcile with their mother country. After the America Revolution raged for a year though, enough citizens began to see that reconciliation was impossible and this meant that a vote for independence in Congress could actually succeed. 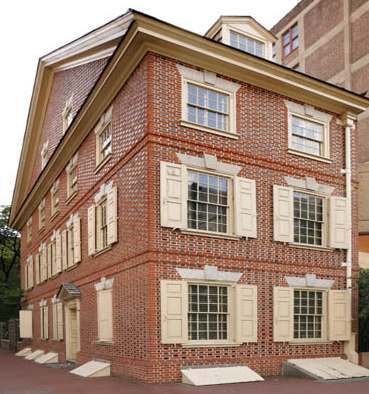 The Committee of Five, consisting of Thomas Jefferson, Benjamin Franklin, John Adams, Roger Sherman and Robert Livingston, was tasked with writing the declaration. Thomas Jefferson wrote most of the document with input from the others. The committee presented their document to Congress on June 28, but it was tabled for a few days. 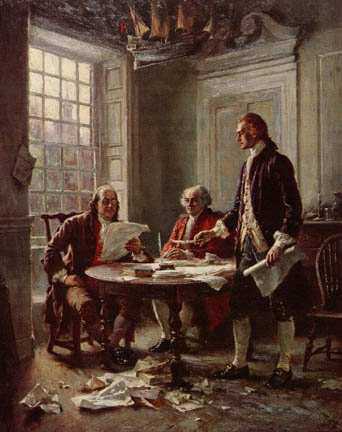 Committee of Five - Shows Jefferson, Adams and Franklin working on the Declaration of Independence

On July 2, the full Congress assembled and 12 of the 13 colonies represented voted for independence with New York abstaining. After the vote, Congress debated and revised the committee's Declaration and adopted it in its final version on July 4th.

On the evening of July 4th, about 200 copies of the Declaration of Independence were printed by printer John Dunlap. These copies were sent around the country and read in various places and published in newspapers. The first public readings occurred in Philadelphia, in Easton, Pennsylvania and in Trenton, New Jersey on July 8th. George Washington had the Declaration read to the Continental Army in New York City on the 9th.

The first Declaration did not have the signatures of the 56 signers. Instead, most of these were added to a parchment copy on August 2nd. Others who were not present signed at later dates. In January, 1777, Congress had more copies printed by Mary Katherine Goddard in Baltimore, this time with the signatures included. This was the first time the world learned of who had signed the document.

Many of the signers suffered great personal harm during the war as a result of their loyalties to the American cause. Some, such as Thomas Jefferson, Samuel Adams, John Hancock and Benjamin Franklin, went on to become political leaders of the new United States and eventually became heroic and iconic figures of American history.

Return to top of Declaration of Independence is adopted