On this day in history, August 7, 1782, George Washington creates what is now known as the Purple Heart award. It was originally known as the Badge of Military Merit.  Washington had long wanted an award for average soldiers who performed meritoriously in combat. From his headquarters at Newburgh, New York, Washington issued an order that read in part:

"The General ever desirous to cherish virtuous ambition in his soldiers, as well as to foster and encourage every species of Military merit, directs that whenever any singularly meritorious action is performed, the author of it shall be permitted to wear on his facings over the left breast, the figure of a heart in purple cloth, or silk, edged with narrow lace or binding. Not only instances of unusual gallantry, but also of extraordinary fidelity and essential service in any way shall meet with a due reward." 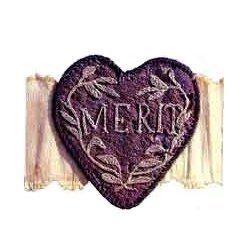 The heart-shaped purple cloth medal was originally called the "Badge of Military Merit," and contained the word "Merit," surrounded by oak leaves. Those awarded the medal were to have their name recorded in a special book and were given the privilege of walking through any sentry or guard, just like officers could do. This was the first time a major military power awarded average soldiers for meritorious conduct in a time when awards usually went to the officers. 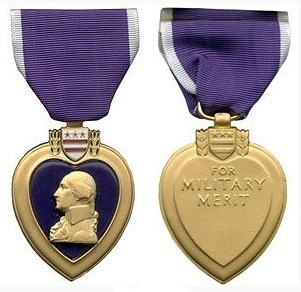 Historians have verified only three recipients of the Badge of Military Merit during the Revolution, though there are some others who may have received it. The reason for so few awards of the medal is unclear, but it probably had to do with the fact that the war was almost over when it was created. The medal was never officially discontinued, but fell out of use for over a century. The picture of the medal above belonged to one of the three verified recipients, Sergeant Elijah Churchill. It now belongs to the New Windsor Cantonment, a New York historical site which was the last encampment of the Continental Army during the American Revolution.

The use of the Badge of Military Merit faded after the Revolution, but in 1918, General John Pershing revived the idea of a badge of merit. General Charles Summerall, US Army Chief of Staff, pushed the idea of reviving the badge in 1927. In 1931, his successor, General Douglas MacArthur, pushed the idea further and the US War Department announced the creation of the "Order of the Purple Heart" on George Washington's 200th birthday, February 22, 1932. The awards could be given to anyone who met certain criteria back to April 5, 1917.

At first, the Purple Heart was awarded for meritorious conduct on the battlefield, just as the original Badge of Military Merit was, and was only awarded to members of the US Army. In 1942, President Franklin D. Roosevelt signed an order extending the Purple Heart to other branches of the US Armed Forces, and to those who had been killed in military service on or after December 7, 1941.

Also in 1942, the "Legion of Merit" was created, which is an award for meritorious conduct in battle. This made the Purple Heart award obsolete, so its requirements for award were changed. Today, the Purple Heart is awarded to anyone who is wounded or killed during military service in the US Armed Forces. It is the oldest existing US military award, with the exception of the "Fidelity Medallion," a one-time award given to three soldiers involved in the capture of Major John Andre, the British spy who helped facilitate Benedict Arnold's treason.