The Siege of Bryan's Station begins

On this day in history, August 15, 1782, the Siege of Bryan's Station begins. Bryan's Station was a fort at the top of a hill with about 40 homes inside its walls near Lexington, Kentucky. Down the hill was Elkhorn Creek with a nearby spring the settlers used for water. In August of 1782, 500 Indians and British soldiers marched into Kentucky, planning to capture Bryan's Station and others.

The Indians snuck up to the fort unnoticed on the evening of August 15th and hid in the brush near the spring. Historians are uncertain how, but the settlers figured out the Indians were there. They went about their business as usual though to prevent the attackers from knowing they were discovered. 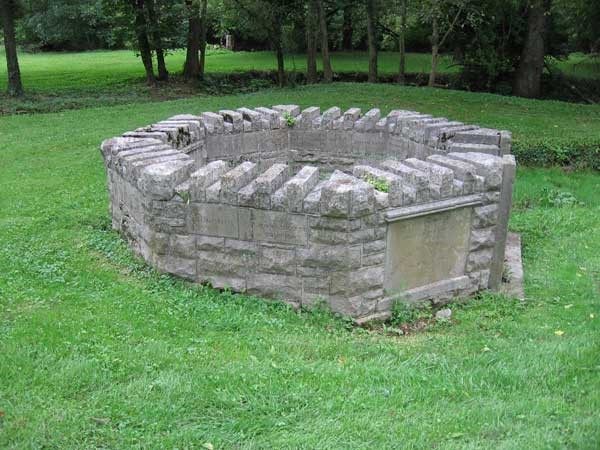 The Indians, believing they were concealed, allowed the few settlers outside the fort to continue their business so as not to expose themselves. Two riders were sent out from the fort for reinforcements, but the Indians let them go. Night fell and the terrified settlers thought it might be their last when they realized they had no water. Water was not only crucial for drinking, but also for putting out fires if the Indians set fire to the fort.

In the morning, a plan was devised to send out the women to gather water at the spring, just like they did every morning. The Indians would not attack because they didn't want to expose themselves by attacking the women only. The brave women marched to the spring and pretended that everything was as usual. As they filled their vessels, they stood within a few feet of hundreds of hiding Indians. After they safely returned to the fort, everyone celebrated, but the Siege of Bryan's Station was not over. 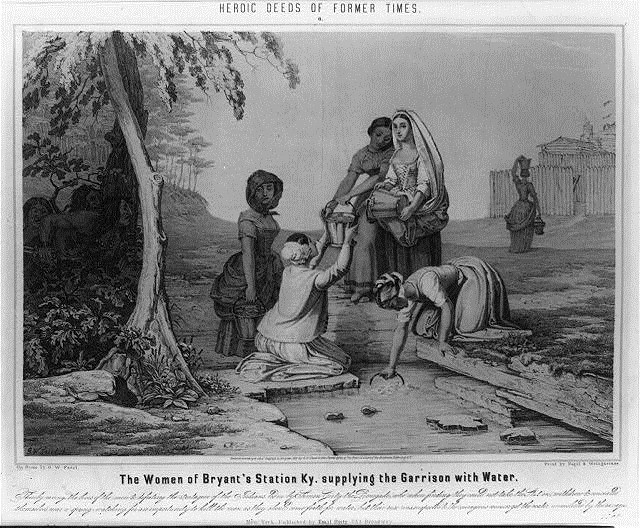 The Women of Bryan's Station

The Indians sent a small group to fire on the opposite side of the fort, hoping to lure the men out. The settlers understood the ruse and sent several men out to pretend to go after the small band, but as soon as shots were fired, they turned around and quickly ran back inside. As soon as the hiding Indians heard the shots, they came running from their hiding places. When they were in the open, a massive volley of shots rang out from the fort and many were killed. The Indians scattered and ran back to the woods. A few reached the still open gates of the fort, however, and set fire to some of the buildings. The settlers raced to put the fires out and a providential wind came that blew the smoking embers away from the fort.

In the afternoon, reinforcements arrived. 16 brave horsemen galloped through a barrage of Indian fire right to the gates of the fort with not a single man injured. 30 more men on foot got trapped in the cornfield and were forced to scatter.

That evening, the Indians met and decided the fort was impregnable without artillery to breach the walls. On the morning of the 17th, when the settlers arose, the Indians had abandoned their camp. More militia arrived at Bryan's Station to defend the fort over the next few days and a large party went after the Indians. Unfortunately, the Indians ambushed them at Blue Licks, in the worst defeat on the western frontier during the American Revolution, before returning to their homes in the Ohio country. The massive force that laid siege to Bryan's Station and inflicted the devastating defeat at Blue Licks proved to be the last major Indian invasion into Kentucky. Individual settlers suffered at the hands of Indians for years to come, but the largest Indian battles in the Kentucky territory were now in the past.

Return to top of the Siege of Bryan's Station begins