Congress authorizes the first printing of the Bible

On this day in history, September 12, 1782, Congress authorizes the first printing of the Bible in North America by Philadelphia publisher, Robert Aitken. This Bible has been called the "Bible of the Revolution." But why would Congress "authorize" the publishing of a Bible?

In Europe, it was traditional for the Christian governments to authorize or license Bible publishers for accuracy. It was believed that if any old person could publish the Bible, inaccuracies could creep into the text, creating confusion amongst the populace about what was proper Christian doctrine. 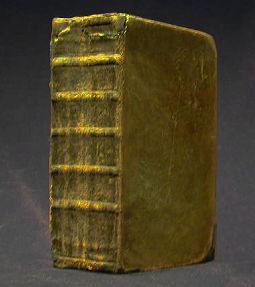 After the boycotts of British goods began during the Revolution, there was a shortage of Bibles in the American colonies because Bibles were previously imported from Britain. As early as 1777, Congress discussed importing Bibles from Scotland or Holland, but these plans were never completed.

On January 21, 1781, Robert Aitken addressed a letter to Congress requesting them to review and authorize a printing of the Bible he was currently working on. Aitken stated that he knew Congress would "not neglect spiritual security, while they are virtuously contending for temporal blessings." He also said the Bible would be used in schools and requests that Congress review it for accuracy. He asks them to appoint and authorize him to print as many as were necessary to meet the needs of the American people. 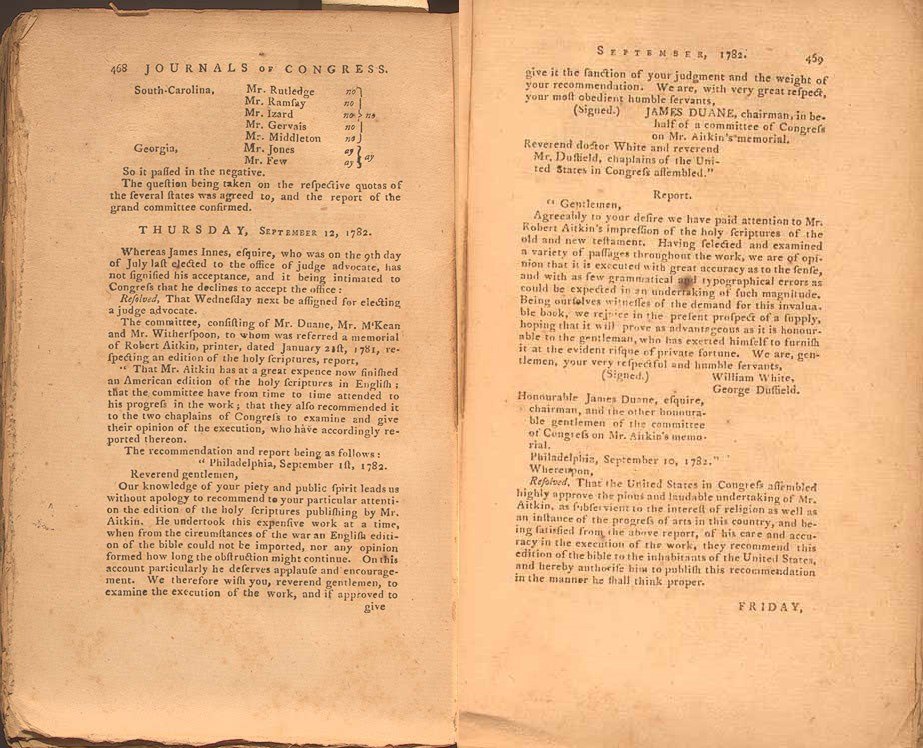 Journal of Congress, September 12, 1782 The entry in Congress' journal on September 12 shows the correspondence and resolution authorizing the Aitken Bible.

On September 1, the chaplains reported back that they believed Aitken's printing was indeed accurate and indicated it would provide them great personal joy that a new supply of Bibles would finally be available in America once again.

On September 12, Congress took up the recommendation based on the chaplains' review and passed the following resolution, which was printed in the front of the Aitken Bible: "RESOLVED, THAT the United States in Congress assembled highly approve the pious and laudable undertaking of Mr. Aitken, as subservient to the interest of religion, as well as an instance of the progress of arts in this country, and being satisfied from the above report of his care and accuracy in the execution of the work, they recommend this edition of the Bible to the inhabitants of the United States, and hereby authorize him to publish this Recommendation in the manner he shall think proper."

Return to top of Congress authorizes first printing of the Bible