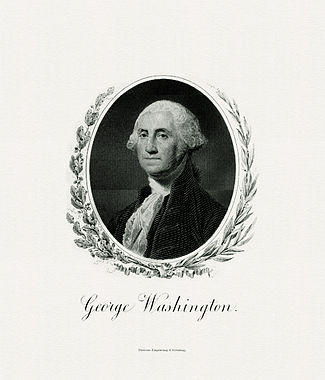 Each George Washington Quote on this page comes from the middle years of his presidency from 1793-1795. They are taken from his own speeches to Congress and personal letters to such people as Richard Henry Lee, Gouverneur Morris and his own step-granddaughter, Eleanor Parke Custis, whom he counsels about womanhood. Other topics covered in these quotes include the need to civilize the Indians, the importance of paying off the public debt and his desire to retire from public life and return to Mount Vernon. Each George Washington Quote on this page is listed in chronological order and there are links to more before and after this time period at the bottom of the page.

"We have abundant reason to rejoice that in this Land the light of truth & reason has triumphed over the power of bigotry and superstition, and that every person may here worship God according to the dictates of his own heart. In this enlightened age & in this Land of equal liberty it is our boast, that a man's religious tenets will not forfeit the protection of the Laws, nor deprive him of the right of attaining & holding the highest offices that are known in the United States." - Letter to the Members of the New Church in Baltimore, January 22, 1793

"The arrows of malevolence... however barbed and well pointed, never can reach the most vulnerable part of me; though, whilst I am up as a mark, they will be continually aimed." - Letter to Richard Henry Lee, July 21, 1793

"I give my signature to many Bills with which my Judgment is at variance... From the Nature of the Constitution, I must approve all parts of a Bill, or reject it in total. To do the latter can only be Justified upon the clear and obvious grounds of propriety; and I never had such confidence in my own faculty of judging as to be over tenacious of the opinions I may have imbibed in doubtful cases." - Letter to Edmund Pendleton, September 23, 1793

"There is a rank due to the United States, among nations, which will be withheld, if not absolutely lost, by the reputation of weakness. If we desire to avoid insult, we must be able to repel it; if we desire to secure peace, one of the most powerful instruments of our rising prosperity, it must be known that we are at all times ready for war." - Annual Message, December, 1793

"No pecuniary consideration is more urgent, than the regular redemption and discharge of the public debt: on none can delay be more injurious, or an economy of time more valuable." - Message to the House of Representatives, December 3, 1793

"If we desire to avoid insult, we must be able to repel it; if we desire to secure peace, one of the most powerful instruments of our rising prosperity, it must be known, that we are at all times ready for War." - Fifth Annual Address to Congress, December 13, 1793

"At disappointments and losses which are the effects of Providential acts, I never repine; because I am sure the alwise disposer of events knows better than we do, what is best for us, or what we deserve." - Letter to William Pearce, May 25, 1794

"My primary objects, to which I have steadily adhered, have been to preserve the country in peace if I can, and to be prepared for war if I cannot; to effect the first, upon terms consistent with the respect which is due to ourselves, and with honor, justice, and good faith to all the world." - Letter to Gouverneur Morris, June 25, 1794

"It is to an established maxim of mine, not to accept a Present from any one." - Letter to Mrs. Matthew Anderson, July 20, 1794

"Truth will ultimately prevail where there is pains taken to bring it to light." - Letter to Charles M. Thurston, August 10, 1794

"It is with equal pride and satisfaction I add, that as far as my information extends, this insurrection is viewed with universal indignation and abhorrence; except by those who have never missed an opportunity by side blows, or otherwise, to aim their shafts at the general government; and even among these there is not a Spirit hardy enough, yet, openly to justify the daring infractions of Law and order; but by palliatives are attempting to suspend all proceedings against the insurgents until Congress shall have decided on the case, thereby intending to gain time, and if possible to make the evil more extensive, more formidable, and of course more difficult to counteract and subdue. I consider this insurrection as the first formidable fruit of the Democratic Societies; brought forth I believe too prematurely for their own views, which may contribute to the annihilation of them. That these societies were instituted by the artful and designing members (many of their body I have no doubt mean well, but know little of the real plan,) primarily to sow the seeds of jealousy and distrust among the people, of the government, by destroying all confidence in the Administration of it; and that these doctrines have been budding and blowing ever since, is not new to any one, who is acquainted with the characters of their leaders, and has been attentive to their manoeuvres. I early gave it as my opinion to the confidential characters around me, that, if these Societies were not counteracted (not by prosecutions, the ready way to make them grow stronger) or did not fall into disesteem from the knowledge of their origin, and the views with which they had been instituted by their father, Genet, for purposes well known to the Government; that they would shake the government to its foundation. Time and circumstances have confirmed me in this opinion, and I deeply regret the probable consequences, not as they will affect me personally, (for I have not long to act on this theatre, and sure I am that not a man amongst them can be more anxious to put me aside, than I am to sink into the profoundest retirement) but because I see, under a display of popular and fascinating guises, the most diabolical attempts to destroy the best fabric of human government and happiness, that has ever been presented for the acceptance of mankind." - Letter to Richard Henry Lee, August 22, 1794

"The fundamental principle of our Constitution... enjoins (requires) that the will of the majority shall prevail." - Sixth Annual Address, November 19, 1794

"Let us unite, therefore, in imploring the Supreme Ruler of nations, to spread his holy protection over these United States; to turn the machinations of the wicked to the confirming of our constitutions; to enable us at all times to root out internal sedition, and put invasion to flight; to perpetuate to our country that prosperity, which his goodness has already conferred, and to verify the anticipation of this government being a safeguard to human rights." - Sixth Annual Address, November 19, 1794

"Were it not that I am principled against selling Negroes... I would not in twelve months from this date be possessed of one as a slave." - Letter to Alexander Spotswood, November 23, 1794

"I am principled against selling negroes, as you would do cattle at a market." - Letter to Alexander Spotswood, November 23, 1794

"In the composition of the human frame there is a good deal of inflammable matter, however dormant it may lie for a time." - Letter to Eleanor Parke Custis, January 16, 1795

"Love is said to be an involuntary passion, and it is, therefore, contended that it cannot be resisted. This is true in part only, for like all things else, when nourished and supplied plentifully with ailment, it is rapid in its progress; but let these be withdrawn and it may be stifled in its birth or much stinted in its growth." - Letter to Eleanor Parke Custis, January 16, 1795

"A woman... all beautiful and accomplished will, while her hand and heart are undisposed of, turn the heads and set the circle in which she moves on fire. Let her marry, and what is the consequence? The madness ceases and all is quiet again. Why? Not because there is any diminution in the charms of the lady, but because there is an end of hope." - Letter to Eleanor Parke Custis, January 16, 1795

"A sensible woman can never be happy with a fool." - Letter to Eleanor Parke Custis, January 16, 1795

"It rarely happens otherwise than that a thorough-faced coquette dies in celibacy, as a punishment for her attempts to mislead others, by encouraging looks, words, or actions, given for no other purpose than to draw men on to make overtures that they may be rejected." - Letter to Eleanor Parke Custis, January 16, 1795

"When one side only of a story is heard and often repeated, the human mind becomes impressed with it insensibly." - Letter to Edmund Pendleton, January 22, 1795

"A month from this day, if I live to see the completion of it, will place me on the wrong, perhaps it would be better to say, on the advanced, side of my grand climacteric; and altho' I have no cause to complain of the want of health, I can religiously aver that no man was ever more tired of public life, or more devoutly wished for retirement, than I do." - Letter to Edmund Pendleton, on his nearing retirement, January 22, 1795

"It is well known, that, when one side only of a story is heard and often repeated, the human mind becomes impressed with it insensibly." - Letter to Edmund Pendleton, January 22, 1795

"We ought to deprecate the hazard attending ardent and susceptible minds, from being too strongly, and too early prepossessed in favor of other political systems, before they are capable of appreciating their own." - Letter to the Commissioners of the District of Columbia, January 28, 1795