George Washington Quotes
During the Writing of the Constitution 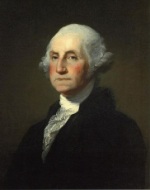 "I commend you, however, for passing the time in as merry a manner as you possibly could; it is assuredly better to go laughing than crying thro' the rough journey of life." - Letter to Theodorick Bland, August 15, 1786

"I consider it an indubitable mark of mean-spiritedness and pitiful vanity to court applause from the pen or tongue of man." - Letter to the Marquis de Chastellux, August 18, 1786

"I never mean... to possess another slave by purchase; it being among my first wishes to see some plan adopted by which slavery in this country may be abolished by slow, sure, and imperceptible degrees." - Letter to John Francis Mercer, September 9, 1786

"It being among my first wishes to see some plan adopted, by which slavery in this country may be abolished by law." - Letter to John Mercer, September 9, 1786

"If they have real grievances redress them, if possible; or acknowledge the justice of them, and your inability to do it at the moment. If they have not, employ the force of government against them at once." - Letter to Henry Lee, October 31, 1786

"Let the reins of government then be braced and held with a steady hand, and every violation of the constitution be reprehended. If defective, let it be amended, but not suffered to be trampled upon whilst it has an existence." - Letter to Henry Lee, October 31, 1786

"No morn ever dawned more favorable than ours did; and no day was every more clouded than the present! Wisdom, and good examples are necessary at this time to rescue the political machine from the impending storm." - Letter to James Madison, November 5, 1786

"It is not the lowest priced goods that are always the cheapest - the quality is, or ought to be as much an object with the purchaser, as the price." - Letter to P. Marsteller, December 15, 1786

"That the Federal Government is nearly, if not quite at a stand, none will deny. The first question then is, shall it be annihilated or supported? If the latter, the proposed convention is an object of the first magnitude, and should be supported by all the friends of the present Constitution. In the other case, if on a full and dispassionate revision thereof, the continuance shall be adjudged impracticable or unwise, as only delaying an event which must 'ere long take place; would it not be better for such a Meeting to suggest some other, to avoid if possible civil discord or other impending evils? I must candidly confess, as we could not remain quiet more than three or four years in time of peace, under the Constitutions of our own choosing; which it was believed, in many States at least, were formed with deliberation and wisdom, I see little prospect either of our agreeing upon any other, or that we should remain long satisfied under it if we could. Yet I would wish any thing, and every thing essayed to prevent the effusion of blood, and to avert the humiliating and contemptible figure we are about to make in the annals of mankind." - Letter to David Humphreys, December 26, 1786

"It is one of the evils, perhaps not the smallest, of democratical governments that the People must feel before they will see or act." - Letter to David Humphreys, March 8, 1787

"Laws or ordinances unobserved, or partially attended to, had better never have been made; because the first is a mere nihil (useless), and the second is productive of much jealousy and discontent." - Letter to James Madison, March 31, 1787

"It is too probable that no plan we propose will be adopted. Perhaps another dreadful conflict is to be sustained. If, to please the people, we offer what we ourselves disprove, how can we afterwards defend our work? Let us raise a standard to which the wise and the honest can repair. The event is in the hand of God." - Comments to Governeur Morris at the First Continental Congress, May 14, 1787

"Happiness depends more upon the internal frame of a person's own mind, than on the externals in the world." - Letter to Mary Ball Washington, May 15, 1787

"No doubt there will be a diversity of sentiments on this important subject; and to inform the judgment, it is necessary to hear all arguments that can be advanced. To please all is impossible, and to attempt it would be vain. The only way, therefore, is, under all the views in which it can be placed, and with a due consideration to circumstances, habits, &c., &c., to form such a government as will bear the scrutinizing eye of criticism, and trust it to the good sense and patriotism of the people to carry it into effect. Demagogues, men who are unwilling to lose any of their State consequence, and interested characters in each, will oppose any general government. But let these be regarded rightly, and justice, it is to be hoped, will at length prevail." - Letter to David Stuart, July 1, 1787

"It is to be regretted, I confess, that democratical states must always feel before they can see, it is this that makes their gov. slow, but the people will be right at last." - Letter to the Marquis de Lafayette, July 25, 1787

"I wish to see the sons and daughters of the world in Peace and busily employed in the more agreeable amusement of fulfilling the first and great commandment, Increase and Multiply : as an encouragement to which we have opened the fertile plains of the Ohio to the poor, the needy and the oppressed of the Earth; any one therefore who is heavy laden, or who wants land to cultivate, may repair thither and abound, as in the Land of promise, with milk and honey: the ways are preparing, and the roads will be made easy, thro' the channels of Potomac and James river." - Letter to the Marquis de Lafayette, July 25, 1787

"The prospect, that a good general government will in all human probability be soon established in America, affords me more substantial satisfaction; than I have ever before derived from any political event. Because there is a rational ground for believing that not only the happiness of my own countrymen, but that of mankind in general, will be promoted by it." - Letter to the Marquis de Lafayette, July 25, 1787

"I am not less ardent in my wish that you may succeed in your plan of toleration in religious matters. Being no bigot myself to any mode of worship, I am disposed to indulge the professors of Christianity in the church, that road to Heaven, which to them shall seem the most direct plainest easiest and least liable to exception." - Letter to the Marquis de Lafayette, August 15, 1787

"I wish the constitution, which is offered, had been made more perfect; but I sincerely believe it is the best that could be obtained at this time. And, as a constitutional door is opened for amendment hereafter, the adoption of it, under the present circumstances of the Union, is in my opinion desirable." - Letter to Patrick Henry, September 24, 1787

"Speak seldom, but to important subjects, except such as particularly relate to your constituents, and, in the former case, make yourself perfectly master of the subject." - On public speaking, November 10, 1787

"The warmest friends and the best supports the constitution has, do not contend that it is free from imperfections; but they found them unavoidable, and are sensible, if evil is likely to arise therefrom, the remedy must come hereafter; for in the present moment it is not to be obtained; and, as there is a constitutional door open for it, I think the people (for it is with them to judge), can, as they will have the advantage of experience on their side, decide with as much propriety on the alterations and amendments which are necessary, as ourselves. I do not think we are more inspired, have more wisdom, or possess more virtue, than those who will come after us." - Letter to Bushrod Washington, November 10, 1787

"The power under the constitution will always be in the people. It is intrusted for certain defined purposes, and for a certain limited period, to representatives of their own choosing; and, whenever it is executed contrary to their interest, or not agreeable to their wishes, their servants can and undoubtedly will be recalled." - Letter to Bushrod Washington, November 10, 1787

"If we cannot learn wisdom from experience, it is hard to say where it is to be found." - Letter to Bushrod Washington, November 10, 1787

"Should the States reject this excellent Constitution, the probability is, an opportunity will never again offer to cancel another in peace -- the next will be drawn in blood." - In the Pennsylvania Journal and Weekly Advertiser, November 14, 1787