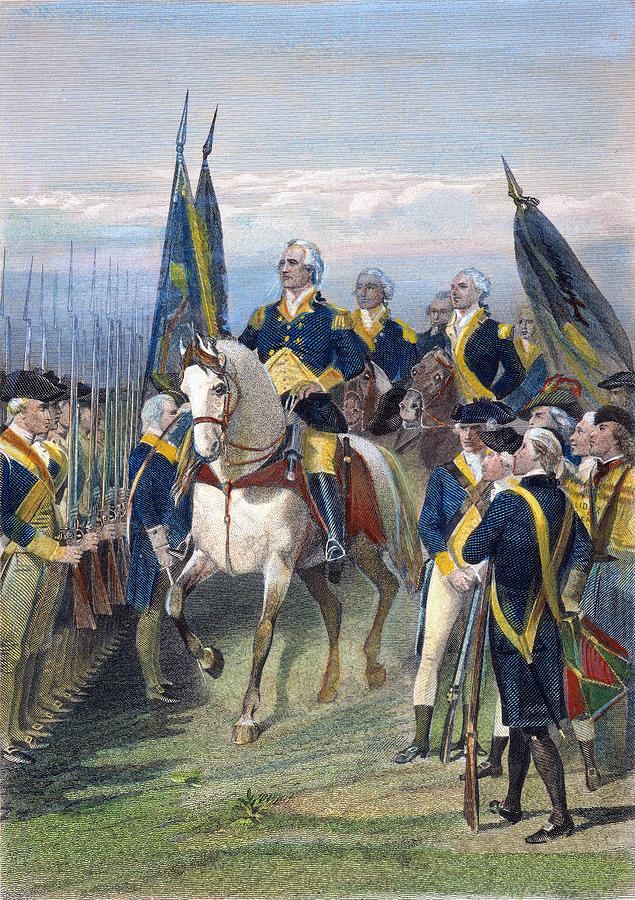 "Unhappy it is... to reflect that a brother's sword has been sheathed in a brother's breast, and that the once happy and peaceful plains of America are either to be drenched with blood or inhabited by slaves. Sad alternative! But can a virtuous man hesitate in his choice?" - Letter to George William Fairfax, about the Battle of Concord, May 31, 1775

"Mr. President, Though I am truly sensible of the high honor done me in this appointment, yet I feel great distress from a consciousness that my abilities and military experience may not be equal to the extensive and important trust. However, as the Congress desire it, I will enter upon the momentous duty and exert every power I possess in the service and for support of the glorious cause. I beg they will accept my most ordeal thanks for this distinguished testimony of their approbation. But lest some unlucky event should happen unfavourable to my reputation, I beg it may be remembered by every gentleman in the room, that I this day declare with the utmost sincerity I do not think myself equal to the command I am honored with. As to pay, Sir, I beg leave to assure the Congress, that as no pecuniary consideration could have tempted me to accept this arduous employment at the expense of my domestic ease and happiness, I do not wish to make any profit from it. I will keep an exact account of my expenses. Those I doubt not they will discharge, and that is all I desire." - Letter to John Hancock, President of Congress, June 16, 1775

"Life is always uncertain, and common prudence dictates to every man the necessity of settling his temporal concerns, while it is in his power, and while the mind is calm and undisturbed." - Letter to Martha Washington, June 18, 1775

"I shall rely, therefore, confidently on that Providence which has heretofore preserved and been bountiful to me, not doubting but that I shall return safely to you in the fall." - Letter to Martha Washington, June 18, 1775

"It was utterly out of my power to refuse this appointment, without exposing my character to such censures, as would have reflected dishonor upon myself, and given pain to my friends." - Letter to Martha Washington, after accepting position as commander in chief of continental army, June 18, 1775

"I shall not be deprived... of a comfort in the worst event, if I retain a consciousness of having acted to the best of my judgment." - Letter to Col. Burwell Bassett, June 19, 1775

"I am now embarked on a tempestuous ocean, from whence perhaps no friendly labor is to be found. I have been called upon by the unanimous voice of the Colonies to the command of the Continental Army. It is an honor I by no means aspired to. It is an honor I wished to avoid, as well as from an unwillingness to quit the peaceful enjoyment of my Family, as from a thorough conviction of my own Incapacity & want of experience in the conduct of so momentous a concern; but the partiallity of the Congress, added to some political motives, left me without a choice. May God grant, therefore, that my acceptance of it, may be attended with some good to the common cause, & without injury (from want of knowledge) to my own reputation. I can answer but for three things: a firm belief of the justice of our cause, close attention in the prosecution of it, and the strictest Integrity. If these cannot supply the place of ability & Experience, the cause will suffer, & more than probable my character along with it, as reputation derives its principal support from success." - Letter to Col. Burwell Bassett, his brother-in-law, June 19, 1775

"I am embarked on a wide ocean, boundless in its prospect, and in which, perhaps, no safe harbor is to be found. I have been called upon by the unanimous voice of the Colonies to take the command of the continental army; an honor I have neither sought after, nor desired, as I am thoroughly convinced that it requires greater abilities and much more experience, than I am master of, to conduct a business so extensive in its nature and arduous in its execution. But the partiality of the Congress, joined to a political motive, really left me without a choice; and I am now commissioned a General and Commander-in-Chief of all the forces now raised, or to be raised, for the defense of the United Colonies. That I may discharge the trust to the satisfaction of my employers, is my first wish; that I shall aim to do it, there remains as little doubt of. How far I shall succeed, is another point; but this I am sure of, that, in the worst event, I shall have the consolation of knowing, if I act to the best of my judgment, that the blame ought to lodge upon the appointers, not the appointed, as it was by no means a thing of my seeking, or proceeding from any hint of my friends. I shall hope that my friends will visit and endeavor to keep up the spirits of my wife, as much as they can as my departure will, I know, be a cutting stroke upon her." - Letter to Augustine Washington, June 20, 1775

"I go fully trusting in that Providence, which has been more bountiful to me than I deserve and in full confidence of a happy meeting with you sometime in the Fall." - Letter to Martha Washington, June 22, 1775

"When we assumed the Soldier, we did not lay aside the Citizen; and we shall most sincerely rejoice with you in the happy hour when the establishment of American Liberty, upon the most firm and solid foundations shall enable us to return to our Private Stations in the bosom of a free, peacefully and happy Country." - Address to the New York Legislature, June 26, 1775

"The General most earnestly requires and expects a due observance of those articles of war established for the government of the Army which forbid profane cursing, swearing and drunkenness. And in like manner he requires and expects of all officers and soldiers not engaged in actual duty, a punctual attendance of Divine services, to implore the blessing of Heaven upon the means used for our safety and defense." - General Orders, July 4, 1775

"As the Cause of our common Country, calls us both to an active and dangerous Duty, I trust that Divine Providence, which wisely orders the Affairs of Men, will enable us to discharge it with Fidelity and Success." - Letter to Jonathan Trumbull, July 18, 1775

"The General orders this day to be religiously observed by the forces under his Command, exactly in manner directed by the Continental Congress. It is therefore strictly enjoined on all officers and soldiers to attend Divine service. And it is expected that all those who go to worship do take their arms, ammunition and accoutrements, and are prepared for immediate action, if called upon." - General Orders, July 20, 1775

"What may have been the ministerial views which have precipitated the present crisis, Lexington, Concord and Charlestown can best declare. May that God to whom you, too, appeal, judge between America and you. Under his providence, those who influence the councils of America, and all the other inhabitants of the united colonies, at the hazard of their lives are determined to hand down to posterity those just and invaluable privileges which they received from their ancestors." - Letter to General Thomas Gage, August 20, 1775

"Every post is honorable in which a man can serve his country." - Letter to Benedict Arnold, September 14, 1775

"While we are contending for our own liberty, we should be very cautious not to violate the rights of conscience in others, ever considering that God alone is the judge of the hearts of men, and to him only in this case they are answerable." - Letter to Benedict Arnold, September 14, 1775

"It gives me real concern to observe... that you should think it Necessary to distinguish between my Personal and Public Character and confine your Esteem to the former." - Letter to Jonathan Trumbull, September 21, 1775

"Any officer, non-commissioned officer, or soldier who shall hereafter be detected playing at toss-up, pitch, and hustle, or any other games of chance, in or near the camp or village bordering on the encampments, shall without delay be confined and punished for disobedience of orders. The General does not mean by the above to discourage sports of exercise or recreation, he only means to discountenance and punish gaming." - General Orders, October 2, 1775

"My ardent desire is, and my aim has been... to comply strictly with all our engagements foreign and domestic; but to keep the U States free from political connections with every other Country. To see that they may be independent of all, and under the influence of none. In a word, I want an American character, that the powers of Europe may be convinced we act for ourselves and not for others; this, in my judgment, is the only way to be respected abroad and happy at home." - Letter to Patrick Henry, October 9, 1775

"Require nothing unreasonable of your officers and men, but see that whatever is required be punctually complied with. Reward and punish every man according to his merit, without partiality or prejudice; hear his complaints; if well founded, redress them; if otherwise, discourage them, in order to prevent frivolous ones. Discourage vice in every shape, and impress upon the mind of every man, from the first to the lowest, the importance of the cause, and what it is they are contending for." - Letter to Col. William Woodford, November 10, 1775

"I wish to walk in such a line as will give most general satisfaction." - Letter to Joseph Reed, December 15, 1775

Experience teaches us that it is much easier to prevent an enemy from posting themselves than it is to dislodge them after they have got possession.  Letter to the President of Congress, Cambridge, January 11, 1776

"I can bear to hear of imputed or real errors. The man who wishes to stand well in the opinion of others must do this; because he is thereby enabled to correct his faults, or remove prejudices which are imbibed against him." - Letter to Joseph Reed, January 14, 1776

"I have often thought how much happier I should have been, if, instead of accepting of a command under such circumstances, I had taken my musket on my shoulder and entered the ranks, or, if I could have justified the measure to posterity and my own conscience, had retired to the back country, and lived in a wigwam. If I shall be able to rise superior to these and many other difficulties, which might be enumerated, I shall most religiously believe, that the finger of Providence is in it, to blind the eyes of our enemies." - Letter to John Hancock, January 14, 1776

"If I shall be able to rise superior to these and many other difficulties, which might be enumerated, I shall most religiously believe, that the finger of Providence is in it, to blind the eyes of our enemies; for surely if we get well through this month, it must be for want of their knowing the disadvantages we labour under." - Letter to Joseph Reed, January 14, 1776

"Three things prompt men to a regular discharge of their duty in time of action: natural bravery, hope of reward, and fear of punishment." - Letter to John Hancock, President of Congress, February 9, 1776