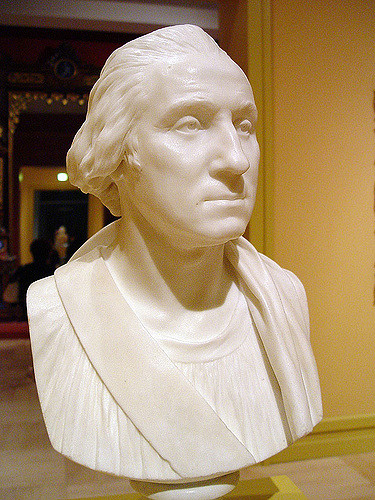 Each George Washington Quote on this page comes from the time just before the end of his presidency during the years of 1795 and 1796. They are taken from his own personal letters and addresses and are written to such notable people as Thomas Jefferson, John Jay, Alexander Hamilton and Gouverneur Morris. They cover such topics as his dislike for political factions, his love of freedom and the importance of seeking out the truth before making judgments. Each George Washington Quote on this page is listed in chronological order and there are links to more both before and after this period at the bottom of the page.

"It has always been a source of serious reflection and sincere regret with me that the youth of the United States should be sent to foreign countries for the purpose of education. Although there are doubtless many, under these circumstances, who escape the danger of contracting principles unfavorable to republican government, yet we ought to deprecate the hazard attending ardent and susceptible minds, from being too strongly and too early prepossessed in favor of other political systems before they are capable of appreciating their own." - Letter to the Commissioners of the District of Columbia, January 28, 1795

"I had rather hear it was delayed than that it should be sown before every thing was in perfect order for it; for it is a fixed principle with me, that whatever is done should be well done. Unless this maxim is attended to, our labor is but in vain, and our expectation of a return, is always deceptious; whilst we are ascribing our disappointments to any thing rather than the true cause, namely not laying, by proper preparations, a good foundation, on which to build our hopes." - Letter to William Pearce, March 22, 1795

"Much indeed to be regretted, party disputes are now carried to such a length, and truth is so enveloped in mist and false representation, that it is extremely difficult to know through what channel to seek it. This difficulty to one, who is of no party, and whose sole wish is to pursue with undeviating steps a path which would lead this country to respectability, wealth, and happiness, is exceedingly to be lamented. But such, for wise purposes, it is presumed, is the turbulence of human passions in party disputes, when victory more than truth is the palm contended for." - Letter to Timothy Pickering, July 27, 1795

"Gentlemen: In every act of my administration, I have sought the happiness of my fellow-citizens. My system for the attainment of this object has uniformly been to overlook all personal, local and partial considerations: to contemplate the United States, as one great whole: to confide, that sudden impressions, when erroneous, would yield to candid reflection: and to consult only the substantial and permanent interests of our country... While I feel the most lively gratitude for the many instances of approbation from my country; I can no otherwise deserve it, than by obeying the dictates of my conscience." - Letter to Boston Selectmen, July 28, 1795

"I am not disposed to quit the ground I have taken, unless circumstances more imperious than have yet come to my knowledge should compel it; for there is but one straight course, and that is to seek truth and pursue it steadily." - Letter to Edmund Randolph, July 31, 1795

"If any power on earth could, or the great power above would, erect the standard of infallibility in political opinions, there is no being that inhabits this terrestrial globe that would resort to it with more eagerness than myself, so long as I remain a servant of the public. But as I have found no better guide hitherto than upright intentions, and close investigation, I shall adhere to these maxims while I keep the watch; leaving it to those who will come after me to explore new ways, if they like; or think them better." - Letter to Major General Henry Knox, September 25, 1795

"Next to a conscientious discharge of my public duties, to carry along with me the approbation of my constituents would be the highest gratification my mind is susceptible of; but, the latter being secondary, I cannot make the former yield to it, unless some criterion more infallible than partial (if they are not party) meetings can be discovered, as the touchstone of public sentiment. If any power on earth could, or the Great Power above would, erect the standard of infallibility in political opinions, there is no being that inhabits this terrestrial globe that would resort to it with more eagerness than myself, so long as I remain a servant of the public. But as I have found no better guide hitherto than upright intentions and close investigation, I shall adhere to those maxims while I keep the watch; leaving it to those who will come after me to explore new ways, if they like or think them better." - Letter to Major General Henry Knox, September 20, 1795

"My policy has been, and will continue to be, while I have the honor to remain in the administration of the government, to be upon friendly terms with, but independent of, all the nations of the earth. To share in the broils of none. To fulfill our own engagements. To supply the wants, and be carriers for them all: Being thoroughly convinced that it is our policy and interest to do so." - Letter to Gouverneur Morris, December 22, 1795

"In a government as free as ours where the people are at liberty, and will express their sentiments, oftentimes imprudently, and for want of information sometimes unjustly, allowances must be made for occasional effervescences; but after the declaration which I have here made of my political creed, you can run no hazard in asserting, that the Executive branch of this government never has, nor will suffer, while I preside, any improper conduct of its officers to escape with impunity; or will give its sanctions to any disorderly proceedings of its citizens." - Letter to Gouverneur Morris, December 22, 1795

"It will not be doubted, that with reference either to individual, or National Welfare, Agriculture is of primary importance. In proportion as Nations advance in population, and other circumstances of maturity, this truth becomes more apparent; and renders the cultivation of the Soil more and more, an object of public patronage." - Eighth Annual Message to Congress, 1796

"My anxious recollections, my sympathetic feeling, and my best wishes are irresistibly excited whensoever, in any country, I see an oppressed nation unfurl the banners of freedom." - Letter to Pierre Auguste Adet, January 1, 1796

"It is on great occasions only, and after time has been given for cool and deliberate reflection, that the real voice of the people can be known." - Letter to Edward Carrington, May 1, 1796

"It has always been and will continue to be my earnest desire to learn, and, as far as is consistent, to comply with, the public sentiment; but it is on great occasions only, and after time has been given for cool and deliberate reflection, that the real voice of the people can be known." - Letter to Edward Carrington, May 1, 1796

"But if we are to be told by a foreign Power... what we shall do, and what we shall not do, we have Independence yet to seek, and have contended hitherto for very little." - Letter to Alexander Hamilton, May 8, 1796

"The nation which indulges towards another an habitual hatred, or an habitual fondness, is in some degree a slave. It is a slave to its animosity or to its affection, either of which is sufficient to lead it astray from its duty and its interest." - Letter to Alexander Hamilton, May 8, 1796

"I am sure the mass of citizens in these United States mean well, and I firmly believe they will always act well whenever they can obtain a right understanding of matters; but in some parts of the Union, where the sentiments of their delegates and leaders are adverse to the government, and great pains are taken to inculcate a belief that their rights are assailed and their liberties endangered, it is not easy to accomplish this; especially, as is the case invariably, when the inventors and abettors of pernicious measures use infinite more industry in disseminating the poison than the well disposed part of the community to furnish the antidote." - Letter to John Jay, May 8, 1796

"Serious misfortunes, originating in misrepresentation, frequently flow and spread before they can be dissipated by truth." - Letter to John Jay, May 8, 1796

"I leave you with undefiled hands -- an uncorrupted heart -- and with ardent vows to heaven for the welfare & happiness of that country in which I and my forefathers to the third or fourth progenitor drew our first breath." - Draft of Farewell Address, May 15, 1796

"That as the allwise dispensor of human blessings has favored no Nation of the Earth wit more abundant, and substantial means of happiness than United America, that we may not be so ungrateful to our Creator, so wanting to ourselves; and so regardless of Posterity, as to dash the cup of beneficence which is thus bountifully offered to our acceptance." - Draft of Farewell Address, May 15, 1796

"Nor did I believe until lately, that it was within the bonds of probability; hardly within those of possibility, that, while I was using my utmost exertions to establish a national character of our own, independent, as far as our obligations, and justice would permit, of every nation of the earth; and wished, by steering a steady course, to preserve this Country from the horrors of a desolating war, that I should be accused of being the enemy of one Nation, and subject to the influence of another; and to prove it, that every act of my administration would be tortured, and the grossest, and most insidious misrepresentations of them be made (by giving one side only of a subject, and that too in such exaggerated and indecent terms as could scarcely be applied to a Nero; a notorious defaulter; or even to a common pick-pocket)." - Letter to Thomas Jefferson, July 6, 1796

"I was no party man myself, and the first wish of my heart was, if parties did exist, to reconcile them." - Letter to Thomas Jefferson, July 6, 1796

"It is the juvenal period of life when friendships are formed, and habits established, that will stick by one." - Letter to Alexander Hamilton, September 1, 1796

"Education generally is one of the surest means of enlightening and giving just ways of thinking to our citizens." - Letter to Alexander Hamilton, September 1, 1796