On this day in history, March 4, 1776, George Washington takes Dorchester Heights, forcing the British to abandon Boston within weeks. After the Battles of Lexington and Concord, the local militia and the Continental Army surrounded the British troops in Boston in a siege which lasted an entire year. 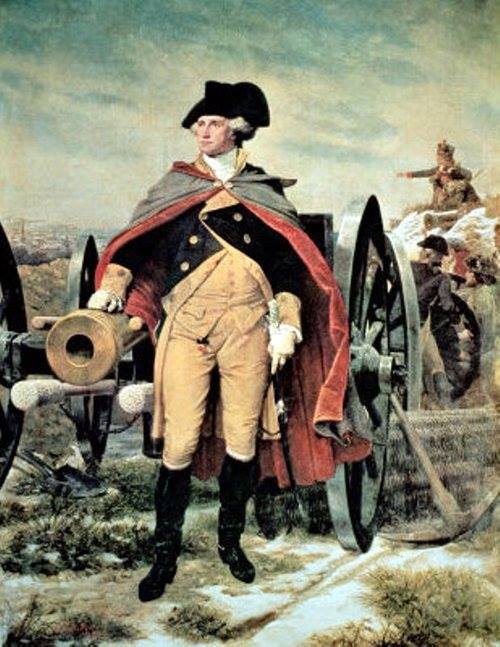 In Boston, General William Howe did not have a lot of options. The only way in or out was by sea. Any movements he made would be quickly detected. He had to be careful not to get into another costly fight like Bunker Hill, which, though a victory, had little strategic significance.

George Washington wanted to capture Dorchester Heights, but was reluctant. Taking the heights would give the Americans the ability to rain down fire on the city and prevent ships from re-supplying them by sea. General Gage would be forced to either try to retake the heights or to leave the city. Washington hesitated for months though because his army was very inexperienced. He didn't know if they could withstand a major British assault and they were very low on ammunition and arms. 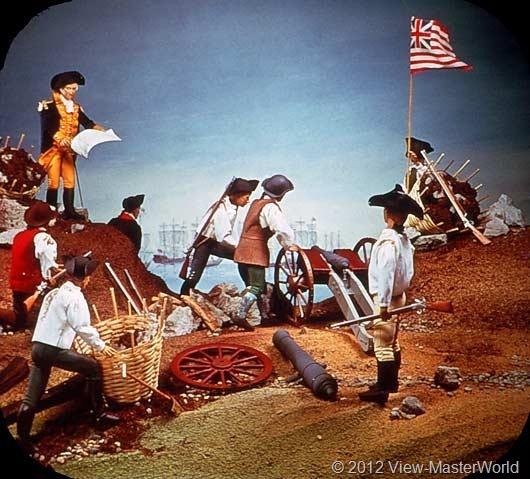 Washington fortifies Dorchester Heights Do you remember that old toy called the View-Master, where you put the slides in and held it up to your eyes to view them? This slide is from View-Master's Revolutionary War series.

Colonel Benedict Arnold and Ethan Allen captured a huge supply of weapons at Fort Ticonderoga, New York on May 10, 1775. In November, Washington sent Colonel Henry Knox to bring the weapons to Boston. It took him 3 months to transport 60 tons of cannons, mortars and howitzers across the wintry Berkshires on sleds pulled by oxen. When they arrived, Washington had the tools he needed to bring the occupation of Boston to an end.

He first created a diversion by placing a few of the cannons in Cambridge and Roxbury and fired them on Boston during the nights of March 2 and 3. On the night of the 4th, the cannon fire continued, but 2,000 American troops began hauling the rest of the cannons up to Dorchester Heights, muffling the wagon sounds with straw wrapped around the wheels. The soldiers built earthworks for protection and by morning, the hills were filled with weapons pointing down on the city and the harbor.

General Howe began making plans for an immediate attack because of this untenable position. The planned assault was stopped, however, that evening when a severe snowstorm rolled in. During the next few days, Admiral Molyneaux Shuldham informed the General that he could not leave his ships in this vulnerable position. Howe realized an attack on the heights at this point would probably result in another disaster like Bunker Hill with heavy British losses. He decided it was wiser to withdraw from Boston to save his army for another day.

On March 17th, General Howe pulled all his troops from the city and sailed for Nova Scotia. Washington let them go unhindered in exchange for Howe's promise not to destroy the city when he left. Washington's army marched for New York and would meet Howe again when he attacked that city in the fall.