On this day in history, September 24, 1755, Chief Justice John Marshall is born, the longest serving Chief Justice of the United States Supreme Court in history. Appointed by President John Adams, Marshall was one of the last surviving members of the founding generation when he died in 1835. He was particularly known for making the Supreme Court a co-equal branch of government with the Presidency and with Congress and establishing the principle that the Court has the final say on what is "Constitutional."

John Marshall was born in rural western Virginia to a father who worked as a surveyor for Lord Fairfax. Marshall's father saw that his children were well-educated, often using books from Lord Fairfax's library to teach them. As a young man, Marshall joined the Culpeper Minutemen of Culpeper County, Virginia and fought in the American Revolution. He later served in the 11th Virginia Regiment of the Continental Army. 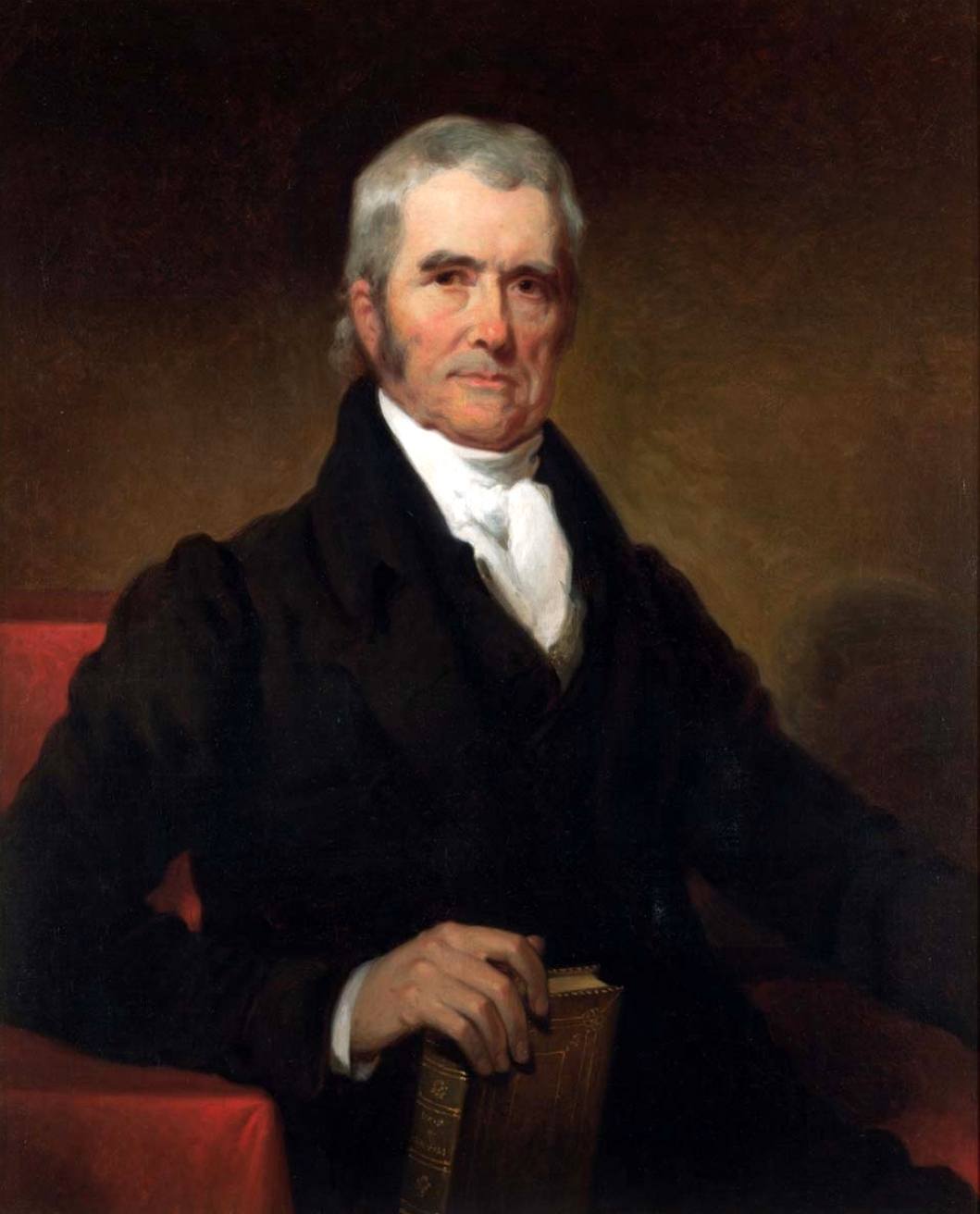 After his service in the army, Marshall studied law with George Wythe and became a lawyer in 1780. In 1782, he was elected to the Virginia House of Delegates, where he served for 9 of the next 14 years, during which time his reputation as a lawyer continued to grow. In 1788, he helped lead the Federalists in securing the vote to accept the US Constitution at the Virginia Ratification Convention. In the late 1780s, he spoke in several prominent cases before both the Virginia and US Supreme Courts.

Marshall turned down appointments from George Washington to be the US Attorney General and the Ambassador to France. President John Adams, however, was successful in appointing Marshall as one of the commissioners to France. That mission ended in the scandal known as the XYZ Affair, during which the commissioners were asked to pay bribes to deal with French officials, but refused. The affair made Marshall quite popular at home. 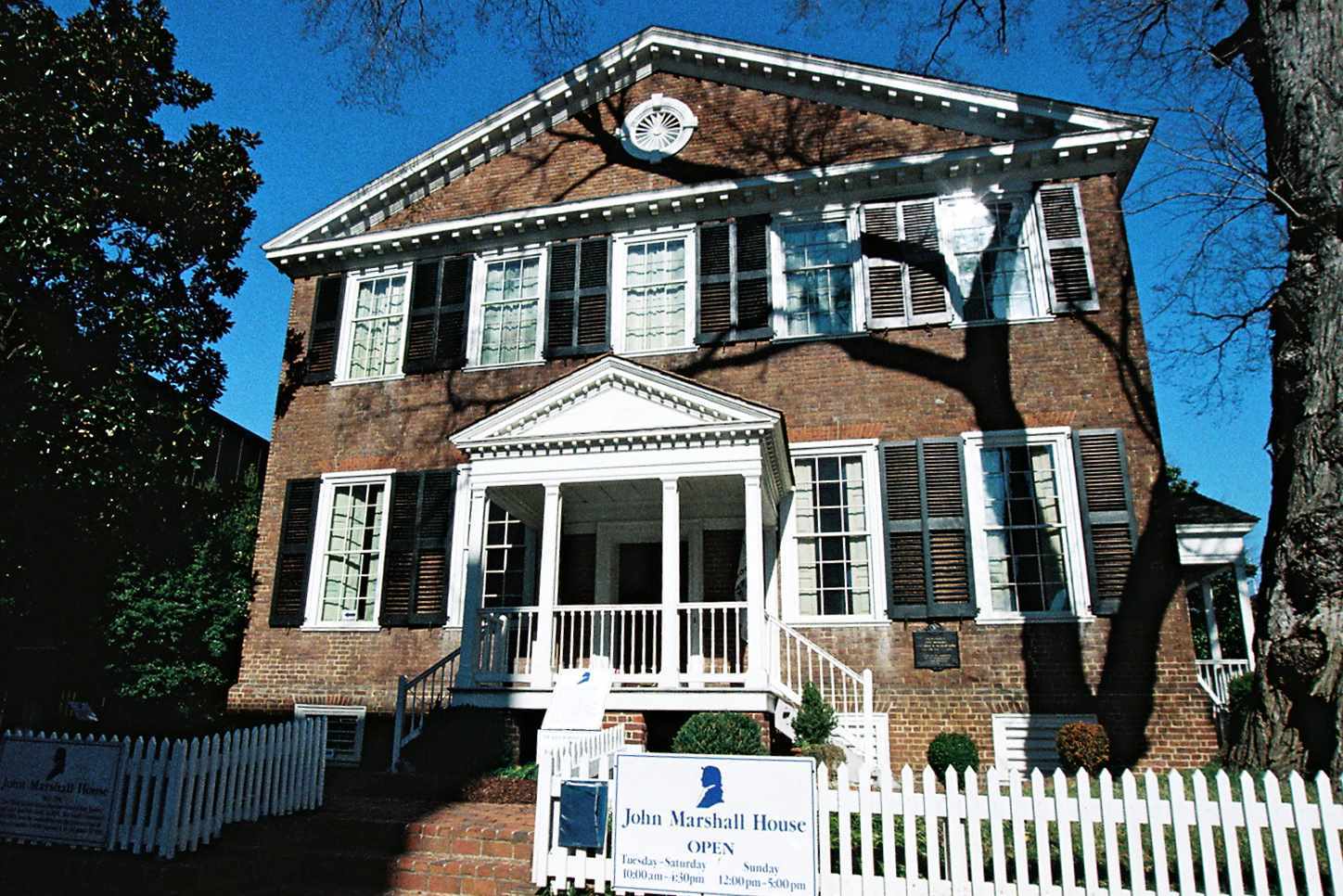 In 1799, Marshall was elected a member of the House of Representatives from Richmond, Virginia. The next year, President Adams successfully appointed Marshall his Secretary of State. When Adams lost the 1800 election, he chose Marshall in a last minute flurry of appointments to be the Chief Justice of the Supreme Court. John Adams later said that was the best decision of his entire life.

Marshall served as Chief Justice for 34 years, the longest service of any chief justice. Marshall used his position of influence to cement Federalist policies into law, which supported a powerful central government. He was often at odds with President Thomas Jefferson and his Democrat-Republican party, which favored states' rights and small government.

Marshall's policies helped establish the Supreme Court as an equal branch of the federal government, giving it authority to review the actions and laws of the President and Congress and deem them "unconstitutional." The Marshall Court helped establish that the government must obey the Constitution and that federal law supersedes state law. His Court gave Congress large leeway in deciding what was “necessary and proper” to do its duties; helped define Congress' role in regulating interstate commerce; established the idea that corporations have the same rights as individuals; and ruled that the Bill of Rights was only intended as a restriction against the federal government.

Marshall served on the Supreme Court right up to his death on July 6, 1835. His other accomplishments include writing and publishing a 5 volume biography of George Washington; serving as the first president of the American Colonization Society, which settled freed American slaves in Liberia; and serving at the 1829 Virginia Constitutional Convention. When he died in 1835, he was one of the last surviving leaders of the founding generation.

Return to top of Chief Justice John Marshall is born