Marquis de Lafayette arranges to fight with the Americans 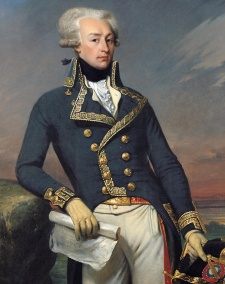 On this day in history, December 7, 1776, the Marquis de Lafayette arranges to fight with the Americans. Meeting with Silas Deane, one of the American ambassadors to Paris, Lafayette arranged to join the American war as a major general. Forbidden to go by King Louis XVI, Lafayette obtained a ship and, escaping the efforts of the King to detain him, set sail in April of 1777. He was only 19 years old.

Gilbert du Motier, the Marquis de Lafayette, was an aristocrat born in the south of France from a distinguished line, including a marshal who served in Joan of Arc's army, a legendary ancestor who fought in the Crusades and his grandfather, the ultra-wealthy Comte de La Rivière. Lafayette was trained for the military from a young age. Due to his military and society connections, he became a member of the Freemasons where he was exposed to the ideas of the Enlightenment and political liberty. Many of these connections supported French involvement in the American Revolution against Britain and Lafayette determined to join the Americans in their fight for freedom.

Fearful of being arrested, Lafayette left Europe dressed as a woman to avoid detection. He arrived in South Carolina on June 13, 1777 and made his way to Philadelphia. Congress did not want to receive him at first, believing he was just another Frenchman looking to make a name for himself. Eventually, Ben Franklin persuaded George Washington to accept him as a personal aide. Washington and Lafayette grew very close, even to the point that Lafayette was almost treated as a son. He became one of Washington's inner circle and one of his most trusted advisers during the war.

Lafayette went on to serve in the Battle of Brandywine, where he was injured. He served in New Jersey with General Nathanael Greene; helped expose the cabal of General Thomas Conway to replace George Washington; fought in the Battles of Barren Hill, Rhode Island and Monmouth; and was eventually sent back to France to help negotiate more substantial support for the Americans. After returning to the US, Lafayette was put in command of three regiments in Virginia where he fought against the traitor, Benedict Arnold and General Charles Cornwallis. Lafayette's actions trapped the General at Yorktown, contributing to his surrender on October 19, 1781, where Lafayette was present at the surrender ceremony. 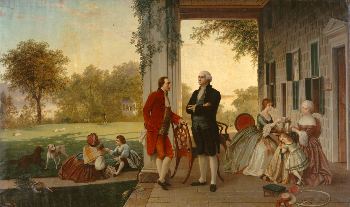 Washington and Lafayette at Mount Vernon, 1784 by Rossiter and Mignot Metropolitan Museum of Art

When Lafayette returned to France, he joined the French government, where he served for many years as a politician and military officer. During the French Revolution, Lafayette was branded as a traitor for helping the King and was captured while trying to escape the country. He spent the next five years in an Austrian prison. His wife narrowly escaped the country through the intervention of the American ambassador, Gouverneur Morris, but several of her family members went to the guillotine. After the Revolution, Napoleon Bonaparte negotiated Lafayette's release and he returned to France, continuing to serve in the Chamber of Deputies.

In 1824-25, the Marquis de Lafayette made a grand tour of the United States at the invitation of President James Monroe. Lafayette toured all 24 states at the time and was received as a hero of the American Revolution. Lafayette visited such places as Mount Vernon, the Brandywine Battlefield, Williamsburg and the University of Virginia, meeting with such notables as President Monroe, Thomas Jefferson and the aging Dorothy Hancock, widow of John Hancock.

Although Washington had died more than 30 years earlier, he and Lafayette had frequent correspondence while he was still alive. When Lafayette finally died on May 20, 1834, he was buried in Paris under soil from George Washington's grave.

Thanks for reading the Marquis de Lafayette arranges to fight with
Revolutionary War and Beyond!