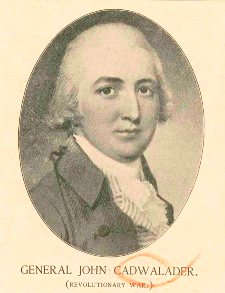 On this day in history, February 10, 1786, Pennsylvania General John Cadwalader dies. Cadwalader was a wealthy Philadelphia merchant and general who played a prominent role in the early years of the Revolution. He was born to a wealthy physician, but never finished college because he and his brother opened a successful mercantile business.

Cadwalader married the daughter of a rich Maryland planter. Between them, their wealth was so great that they built what was called the most luxurious home in the colonies in downtown Philadelphia. George Washington, a personal friend, wrote in his diary that it was the "grandest house he had ever seen." To give you an idea of the wealth and prominence of John Cadwalader, a chair from his parlor sold for $2.75 million at Sotheby's in 1986!

When the American Revolution broke out, Cadwalader was part of Philadelphia's Committee of Safety. He was a militia captain in the "Silk Stockings Company," so named because most of its members were wealthy. He was placed in command of a battalion to protect Philadelphia and was soon promoted to Brigadier General of the Pennsylvania militia.

Cadwalader played a key role early on, fighting in the Battles of Princeton, Brandywine, Germantown and Monmouth. He assisted in the planning of the attack on Trenton, New Jersey, and was charged with bringing a column of soldiers across the Delaware south of the city to assist George Washington. He was unable to get all of his soldiers across the river, however, because of the ice, causing him to turn back and miss the action. The following day, though, they did cross and helped Washington capture Princeton. 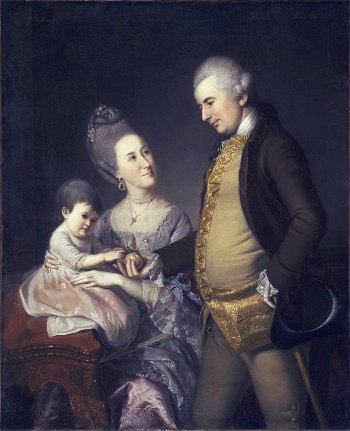 John and Elizabeth Lloyd Cadwalader and their Daughter Anne by Charles Willson Peale, 1772

George Washington so respected Cadwalader that he urged Congress to appoint him a general in the Continental Army. Congress appointed him a Brigadier General, but he declined, instead choosing to stay on as a Pennsylvania general. Shortly after, Washington personally asked him to organize a militia for the defense of eastern Maryland, which he agreed to, later bringing those troops to several prominent battles. Cadwalader was then offered another generalship in the Continental Army over the cavalry, but he declined again, again preferring to remain in charge of the Pennsylvania militia.

In 1778, Cadwalader was involved with suppressing the "Conway Cabal," an effort of General Thomas Conway to have George Washington ousted as commander-in-chief. Cadwalader was so offended at Conway's actions that he challenged him to a duel and shot Conway in the mouth when they met on the field of honor. Conway recovered, wrote a letter of apology to Washington and fled to France, thus ending the Conway Cabal!

As the war shifted to the south, Cadwalader became a trustee of the University of Pennsylvania, a position his father also held, and moved to one of his homes in Maryland where he became a state legislator. He lived there for the rest of his life, but unfortunately died at the very young age of 43 in 1786.