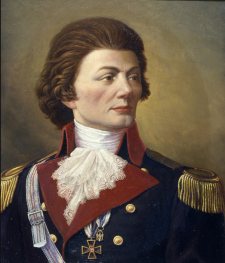 On this day in history, February 12, 1746, Revolutionary War hero Thaddeus Kosciuszko is born in Poland. Kosciuszko studied engineering and artillery in France, but he also studied the arts and became a fairly accomplished artist and composer. After his studies, Kosciuszko (Kos-choos-ko) was unable to purchase a commission in the Polish army because of his family's financial plight, so he decided to join the American Revolution.

This was due partly to Kosciuszko's desire to use his military education, but also because he could relate to America's plight due to harsh treatment his own native Poland had received from Russia and Prussia. Kosciuszko received a letter of recommendation from Ben Franklin at Paris and took this to Philadelphia where he was made a colonel of engineers on October 18, 1776.

Kosciuszko's first assignment was to strengthen the defenses of Philadelphia. In 1777, he was sent to Fort Ticonderoga in New York. His plan for fortifying the fort is well known for being rejected by the fort's commander Major General Arthur St. Clair. If Kosciuszko's advice had been taken, the fort probably would not have fallen. After losing Ticonderoga, Kosciuszko's engineering prowess helped General Nathanael Greene get away from the advancing British army and was integral in locating a battle ground near Saratoga that was nearly impregnable. Kosciuszko's fortifications at Bemis Heights enabled General Horatio Gates to capture British General John Burgoyne's entire army, a major turning point in the war. General Gates wrote that "a young Polish engineer" was largely responsible for the victory. 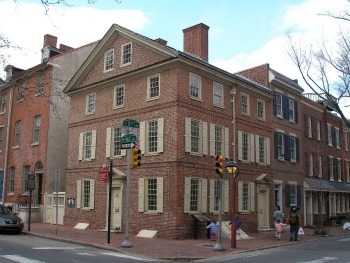 Thaddeus Kosciuszko Home, Philadelphia This is the home where Kosciuszko stayed during his 1797-1798 stay in the US. While living here, he entertained such people as Thomas Jefferson, US Capitol architect Benjamin Latrobe, Mohawk Chief Joseph Brant, Miami Chief Little Turtle and US Constitution signer William Paterson of New Jersey.

In 1778, Kosciuszko was reassigned to West Point on the Hudson River, which was responsible for preventing British ships from traveling upriver. Kosciuszko strengthened the defenses along the river for a year and a half and is usually listed as the fort's chief engineer and architect. In August, 1780, at his own request, Kosciuszko was sent to the south, where he was the chief engineer to General Nathanael Greene. In the south, Kosciuszko helped Greene's army escape across the Yadkin and Dan Rivers from General Cornwallis, chose sites for army camps and helped choose the Guilford Courthouse battle site, where Cornwallis' army was largely destroyed.

Kosciuszko was bayoneted in the buttocks during the Siege of 96, his only injury in the war. In 1782, he took over the intelligence network around Charleston formed by his friend Colonel John Laurens, when he was killed. At the end of the war, Kosciuszko was given an honorary title of Brigadier General, 500 acres and a soldier's pension if he stayed in the United States.

Kosciuszko returned to Poland, however, where he became the top general involved in resisting the Russian occupation. His army was eventually destroyed and Kosciuszko spent several years in a Russian prison. He was freed in 1796 and returned to the United States, where he was welcomed as a war hero and developed a deep friendship with Thomas Jefferson. Kosciuszko would leave America again for France in 1798, where he hoped to persuade Napoleon Bonaparte to give Poland its freedom back. He was unsuccessful though and eventually moved to Switzerland, where he remained in exile for the rest of his life, never returning to his native Poland.