On this day in history, August 25, 1777, the Philadelphia Campaign begins when British General William Howe and his brother, Admiral Richard Howe, land 17,000 troops in an armada of 265 ships at Head of Elk, Maryland. The armada was the largest ever assembled in American waters.

George Washington's Continental Army tracked Howe's movements down the eastern seaboard until he lost track of them near the Delaware Capes. Washington camped at Wilmington, Delaware until he could determine where exactly Howe was going. Howe encountered rough weather at sea, taking six weeks to get from Sandy Hook, New Jersey to Maryland's Elk River at the top of the Chesapeake Bay. Howe's men were sea sick and his horses dying after running out of forage during the long and rough voyage.

Howe landed just below the town of Elkhorn, Maryland, and began unloading supplies and thousands of soldiers, a monumental task in a shallow and muddy river. Ships got stuck in the mud. Horses were so weak after running out of food that they couldn't walk. Some of the largest ships couldn't even make it all the way up river and had to be unloaded further down and their cargos transported by land. 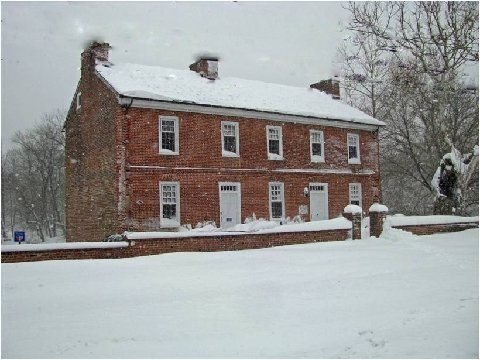 Wilmington sits between Elkton and Philadelphia and Washington himself led frequent reconnoitering missions to determine what the British were doing and what their troop strength was. Howe advanced slowly. He had to wait for his horses to eat and get their strength back. Another huge storm enveloped the area, destroying ammunition for both sides.

Eventually Howe began advancing toward Philadelphia. For weeks, the two armies maneuvered around each other, with frequent skirmishes, but no major battles. Washington finally dug in along the Brandywine Creek near Chadds Ford about 20 miles to the southwest of Philadelphia. The two armies clashed in one of the biggest battles of the Revolution at the Battle of Brandywine on September 11th, a battle that pitted 30,000 soldiers against one another and had almost 2,000 casualties.

The British were the victors at the Battle of Brandywine, the first major battle of the Philadelphia Campaign. The Continental Army was nearly wiped out, and would have been if not for the last minute maneuvers of generals Nathanael Greene and William Alexander, who held off the British until the rest of the army could escape. The American defeat forced Congress to flee Philadelphia in haste and move further inland.

For several more days the two armies maneuvered around one another, but the British were able to march into Philadelphia on September 28th unchallenged. They would continue to occupy the city until June of 1778, when the new American commander, Henry Clinton took over from Howe and abandoned Philadelphia on orders from London. Clinton took the troops back to New York and began the new Southern Campaign to take back the southern states after their attempts in the north had failed.

Return to top of the Philadelphia Campaign begins