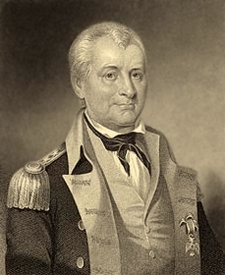 On this day in history, February 9, 1782, General Lachlan McIntosh is exchanged for General Charles O'Hara. McIntosh was born in Scotland and emigrated to Georgia with his father as a boy. As a young man, he moved to Charleston, South Carolina and worked for Henry Laurens, a future President of the Continental Congress. McIntosh became a wealthy rice planter in Georgia and sided with the rebels as the American Revolution broke out, becoming a colonel in the militia.

McIntosh was celebrated for his exploits during the war, but today he is best known for killing Georgia Declaration of Independence signer, Button Gwinnett, in a duel. After signing the Declaration, Gwinnett became the leader of Georgia's Provincial Congress, while McIntosh was made Brigadier General of the Continental Army's Georgia Line. The two clashed continuously, mostly due to Gwinnett's pride.

Gwinnett and McIntosh collaborated on a planned expedition to attack the British at St. Augustine, Florida in early 1777, but when Gwinnett was replaced under Georgia's new Constitution, he was left with no authority. McIntosh was the appointed leader of the expedition and he would not obey Gwinnett's orders, leading to constant infighting and delays. Both were finally called back and the expedition would be a colossal failure.

Gwinnett blamed McIntosh for the failure and McIntosh delivered a seething rebuke of Gwinnett to the legislature. Gwinnett demanded a public apology and when he received none, he challenged McIntosh to a duel. When the two met on May 16, 1777, both were injured, but Button Gwinnett died from his wounds.

McIntosh was charged with murder, but he was acquitted and George Washington had him transferred to Valley Forge for his protection. In May, 1778, McIntosh was appointed Commander of the Western Department of the Continental Army. He was sent to Fort Pitt (Pittsburgh) and charged with security on the western frontier. He built two forts and planned an attack on the British stronghold at Fort Detroit, but was forced to abandon the plan when Congress could not fund it.

In 1779, McIntosh was sent south and was part of the failed attempt to recapture Savannah, Georgia. After retreating to Charleston, General Benjamin Lincoln was forced to surrender his entire army of 5,000 men when the British attacked in 1780. General McIntosh was among the captives and spent the next 21 months in prison. He was finally exchanged for British General Charles O'Hara on February 9, 1782. O'Hara was second-in-command to General Charles Cornwallis and was the officer who surrendered Cornwallis' sword to George Washington at Yorktown. The rank of General O'Hara gives an indication of the rank and prestige of Lachlan McIntosh.

After the war, McIntosh tried to rebuild his plantation which had been destroyed by the British, but he would never find financial success again. He was elected to the Continental Congress in 1784, but never arrived. He served on various boards and commissions in Georgia for several years and passed away in Savannah in 1806.