On this day in history, September 23, 1780, Benedict Arnold's treason is discovered by 3 young patriots who grew suspicious of a passerby who turned out to be British spy, John Andre. The discovery led to the three men's entry into the hall of fame of American heroes from the Revolution.

Benedict Arnold was a hero of the American invasion of Canada and the Battle of Saratoga. He was once viewed as one of the Continental Army's best and brightest and had the personal favor of George Washington. The reason for Arnold's turning is uncertain, but he was known for having frequent disputes with his superiors and was overlooked for promotion several times. This may have been the source of his disgruntlement. 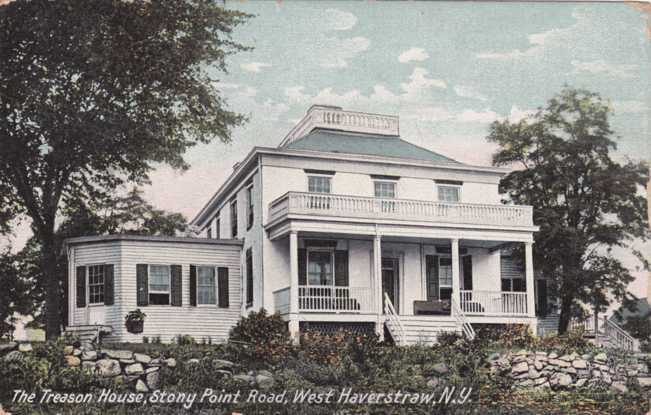 Arnold began corresponding with British General, Sir Henry Clinton in New York the year before and proposed the exchanging of information for certain favors. Arnold used his influence with George Washington to have himself placed in command of West Point, the most strategically important place on the Hudson River preventing a British invasion to the north.

On the evening of September 21, 1780, Arnold met with British Major John Andre at the home of Joshua Hett Smith, a patriot who was unaware of Arnold's true intent, at Haverstraw, New York. Arnold turned over the plans of West Point to Andre and was to receive 20,000 pounds and be made a general in the British army in return. The following morning, Andre began the trek back to New York in disguise, carrying a pass signed by Arnold that would let him through American lines. He carried the secret plans of West Point in his shoes. 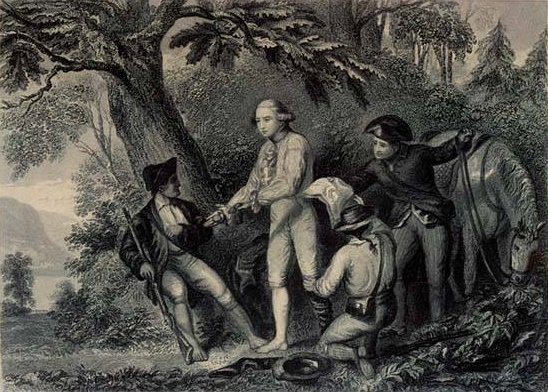 The Capture of Major Andre

After crossing the Croton River, Andre believed he would be in safe territory as Arnold had told him only British patrols would be found beyond that point. When he crossed the river, however, he was stopped by a patrol made up of three young patriots, 25 year old David Williams, 22 year old John Paulding and 20 year old Isaac Van Wert. The three belonged to the New York militia and were in the area searching for cattle stolen by the British.

Young John Paulding wore a worn out Hessian military jacket and this jacket apparently deceived Andre into believing they were British. Andre exclaimed he was glad to meet some friendly soldiers and that he was on important business. The three boys took him into custody instantly and told him they were patriots. When Andre changed his story and produced the signed pass from Arnold, they became more suspicious. They stripped him and found the documents from West Point.

At this point, the three soldiers took Andre to a nearby Continental Army outpost. Lt. Col. John Jameson listened to the story and quickly sent off letters to George Washington and Benedict Arnold (it wasn't yet clear that Arnold was guilty of any wrongdoing). Arnold quickly escaped to a British ship and made his way to safety. George Washington was furious when he arrived at West Point only a few hours after Arnold's departure and the truth was revealed.

Arnold escaped to New York and, as promised, was made a general in the British army. He led attacks in Virginia and Connecticut and later moved to London. John Andre, the captured British spy, was hanged for his role in the affair on October 2. The three boys who captured Andre became heroes, with poems and songs, books and plays written about them. They were well-known figures to Americans for over a hundred years because of all the publicity, but their names have faded in recent times, which is truly a loss to modern day Americans.

Return to top of Benedict Arnold's treason is discovered