On this day in history, September 22, 1776, Nathan Hale is hanged for spying against the British on Long Island. Hale was born in Coventry, Connecticut in 1755. He went to Yale and became a school teacher in New London, Connecticut. When the Revolution broke out, Hale joined Connecticut's 7th Regiment as a lieutenant and marched to Boston to participate in the siege of that city. 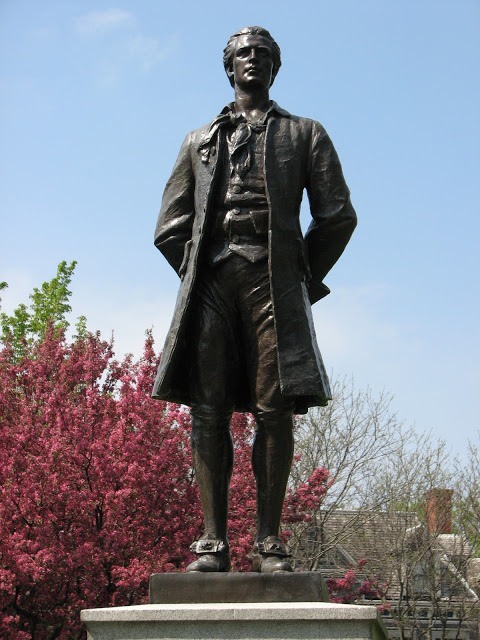 After losing the battle, George Washington knew the British would attempt to invade Manhattan and devised a plan to place a spy into the British ranks on Long Island to learn where the invasion would begin. The 21 year old Hale volunteered for the mission, probably because he was tired of being overlooked and out of harm's way.

Hale sailed from Norwalk, Connecticut across Long Island Sound on September 12th. He landed at Huntington and made his way west where he posed as a teacher of Dutch descent looking for a job. Hale spent several days trying to gather information, especially about the planned invasion of Manhattan. Unbeknownst to Hale, the British invaded the island at Kip's Bay on the 15th, forced the Continental Army to withdraw to the north of the island and captured New York City all on the same day. 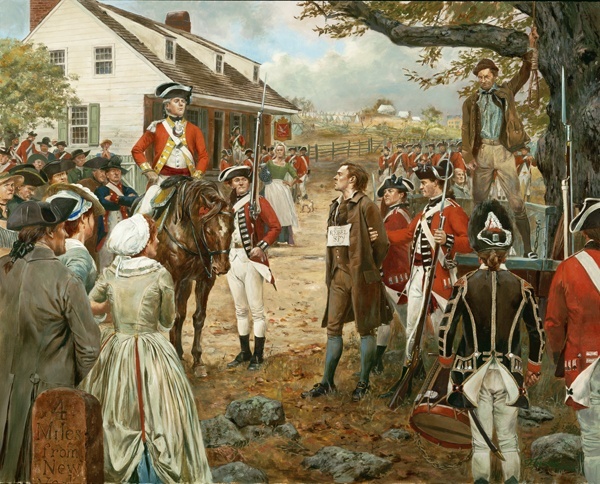 Hale continued with his mission, not realizing that it had already failed. On the evening of September 21st, a large fire started in New York City that burned down a quarter of the town. In the hysteria of the event, some 200 patriot sympathizers were rounded up on suspicion that they had set the fire to prevent the British from using the city as a base of operations.

Hale by this time had already begun to make his way back to Huntington to cross back to safe territory and report back to Washington, so he had nothing to do with the fire. During his escape from Long Island, Hale was tricked into disclosing his mission to a British officer who had been tipped off to Hale's mission. He was taken into custody and sent to General William Howe in New York. Some have speculated that Hale was caught as a result of the frenzy to take patriots into custody after the fire, but there is no evidence to support this claim.

General Howe interrogated Hale at the Beekman Mansion outside the city and sentenced him to hanging for treason. That night, Hale was held in the greenhouse on the Beekman estate, where he was denied his request to have a Bible or see a clergy member. British officer John Montresor reported the young man conducted himself with great composure as he marched to the gallows on September 22.

Before his death, Nathan Hale made one of the most memorable statements of the Revolution, when he allegedly said, "I only regret that I have but one life to lose for my country." Hale apparently made much more lengthy comments in which he condemned the British and made it clear that he was proud of his role in the rebellion.

No grave has ever been discovered for Hale, but numerous statues of the blond haired, blue eyed spy from Connecticut have been erected in his honor. Numerous schools, buildings, army installations and a US submarine have been named for this 21 year old hero of the American Revolution as well.

Return to top of Nathan Hale is hanged